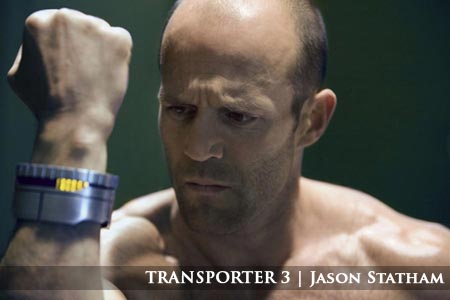 The “Transporter” series turned Brit actor Jason Statham into a movie star. But maybe it’s time to hang up his car keys. He’s better than this. “Transporter 3” once again finds Statham playing Frank Martin, a driver for hire known throughout the underworld for always completing his job. This time Frank finds himself kidnapped by a sinister American (Robert Knepper) and forced to tour Europe with an exploding bracelet around his wrist. If he strays too far from his car he’ll blow up… full story [kansascity.com] If there’s anything good to be said for Transporter 3 it’s that at least, for once, Jason Statham’s Frank Martin character is actually transporting something. In theory Martin is a professional driver, a man of precision who will transport high-value cargo from point A to point B, without asking in questions. In practice, previous movies have rarely given Frank much opportunity to do any actual driving, inventing kidnappings and other excuses for him to get out of the car and kick doors down. For the third film they’ve solved that problem by, almost literally, tying Frank Martin to wheel of his car… full story [Cinema Blend] Cory Yuen’s “The Transporter” was tight, exciting and even witty, but Louis Leterrier’s “Transporter 2” mucked it up with too much plot, awful performances from Amber Valletta and Matthew Modine, and stylized direction that slid into self-parody. (These remain Statham’s best movies, though that’s not saying much compared to “Death Race,” “War,” “London,” etc.) Director Oliver Megaton takes over for episode three, which boasts the longest running time of the trilogy and, after “Quantum of Solace,” is the second action film this month with environmental connections… full story [Metromix Chicago] 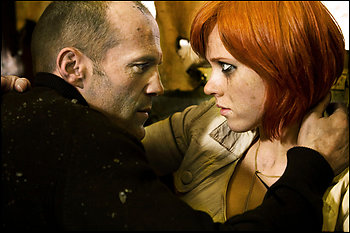 A huge problem with this film is the Valentina character. She must be the most annoying character in film this year. Her English is perfect at times, but rudimentary at other times. She says once with a straight face, “I want to feel the sex one more time before I die.” I truly thought Borat was going to burst on to the screen and state that she is his sister. Another annoying aspect to this character was when Martin was trying desperately to get away from some guys in another car. They are traveling well over 100 miles an hour and she is crawling all over him and distracting him. What sane person would do this while their life is in peril? …… The best part of the film is clearly Statham. He has shown to be an effective action star in this series and in “The Bank Job” and “The Italian Job”. He delivers his lines with aplomb. His martial arts and fighting skills are top notch. Even though it never ceases to amaze me how many times the bad guys go at the hero one by one instead of all at once. It happens not once but twice in this film. It gets a bit tiring to see these old cliches turn up again and again. After these numerous fights, it is good to know that Martin keeps a spare suit and a clean white shirt at the ready… full story [Movie Jungle]

By now, Frank seems burned out, and routinely turns down “transporter” jobs. That is, until the psychopathic “Johnson” (Prison Break’s Robert Knepper) knocks him out and rigs explosives to his body that will detonate if he gets more than 100 feet from his beloved BMW. As peril-situations go, it’s not exactly Speed. It just means you have to be extra careful to find a good parking spot. Meanwhile, Johnson can’t seem to make up his mind about where Frank should be going with Valentina. He’s headed to Budapest then Stuttgart then Odessa. And every time one of his gunsels questions an order, Johnson shoots them. This happens a lot with evil villains, I notice. How do they keep finding staff? … fuill story [CANOE] What ends up getting blown apart during Transporter 3, unfortunately, is any hope for continuing interest in this progressively less-entertaining series, with this latest film ending up as easily the weakest of the three. The connecting element on the behind-the-camera side of the three productions has always been Luc Besson, whose creative talents are much appreciated by fans of the kind of fast-action, clever set-piece, darkly-comic film fare exemplified by La Femme Nikita and The Professional (both of which he wrote and directed) and – of course – The Transporter (which he scripted). Luc was also responsible for one of the more original and graphically stunning bits of sci fi in recent years (if we can call 1997 “recent”) in the form of The Fifth Element… full story [katu.com] An inspired baddie performance from Knepper livens up the movie to a certain degree, and Megaton does squeeze in a sharply conceived bit where Frank frantically chases his stolen car on a bicycle (at least I think it was a bike…the editing is so insane, Frank could’ve been riding a broom for all I know). Still, the thrill has been effectively amputated from the franchise, diminishing Frank to a banal action figure instead of a guilty pleasure… full story [FilmFodder]
Continue Reading
Advertisement
You may also like...
Related Topics:Jason Statham, Louis Leterrier, Robert Knepper, transporter 3