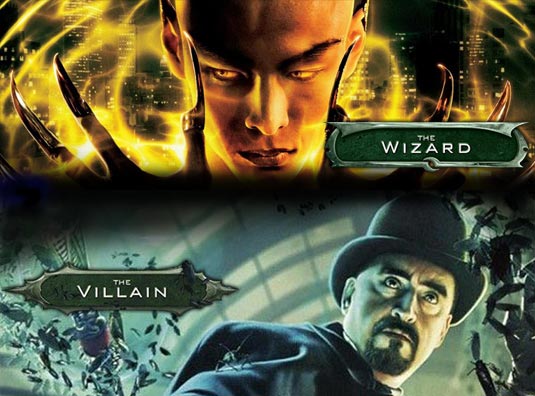 Disney has announced that everyday this week they will release a new character poster for Jon Turteltaub’s The Sorcerer’s Apprentice to help promote the film. Balthazar Blake (Nicolas Cage) is a master sorcerer in modern-day Manhattan trying to defend the city from his arch-nemesis, Maxim Horvath (Alfred Molina). Balthazar can’t do it alone, so he recruits Dave Stutler (Jay Baruchel), a seemingly average guy who demonstrates hidden potential, as his reluctant protege. The sorcerer gives his unwilling accomplice a crash course in the art and science of magic, and thesorcerersapprentogether, these unlikely partners work to stop the forces of darkness. It’ll take all the courage Dave can muster to survive his training, save the city and get the girl as he becomes The Sorcerer’s Apprentice. For now, we have two posters, the first that focuses on the Wizard character, played in the movie by Gregory Woo and the second poster features Maxim Horvath, played by Alfred Molina. Here is a description of the characters and the posters.

Sun Lok “The Wizard” (Gregory Woo) is an ancient, but perpetually young, Chinese sorcerer and Morganian. When he’s unlocked from his Grimhold by Horvath, Sun Lok wreaks havoc in Chinatown during a lively festival by materializing a fearsome fire-breathing dragon. “Sun Lok has been in a little container for thousands and thousands of years, and when he’s let out, he’s really, really angry,” says Woo.

Maxim Horvath (Alfred Molina) was, along with Balthazar Blake and Veronica, a disciple of Merlin and a force of good more than a thousand years ago. But their mutual love for Veronica split the colleagues apart and Horvath has instead become an ally of the wicked Morgana, who murdered Merlin and is seeking to conquer the world with her minions. He and Balthazar have battled through the ages, finally bringing their conflict to modern-day New York City. “In The Sorcerer’s Apprentice, Horvath’s mission is world domination,” says Molina. “Balthazar and Horvath have a rivalry that’s gone on for millennia. Balthazar is maintaining the Merlinean standard of magic as a power that’s used for the benefit of mankind. Horvath is the leader of the Morganians, who take the very different view that magic should be used to subjugate humans. That’s the struggle between good as personified by Nic Cage’s character, and evil as personified by mine. Horvath is a rather smart, debonair, Edwardian villain in the classic tradition of suave bad guys, well dressed and charming, but deadly.” The Sorcerer’s Apprentice, adaptation of the classic story from “Fantasia,” also stars Monica Bellucci, Teresa Palmer and Toby Kebbell. The screenplay is by Matt Lopez and Doug Miro & Carlo Bernard from a screen story by Matt Lopez and Larry Konner & Mark Rosenthal. The official US release date is July 14, 2010.
Continue Reading
Advertisement
You may also like...
Related Topics:Alfred Molina, Carlo Bernard, Doug Miro, Jay Baruchel, Jon Turteltaub, Matt Lopez, Monica Bellucci, Nicolas Cage, Teresa Palmer, The Sorcerers Apprentice, Toby Kebbell