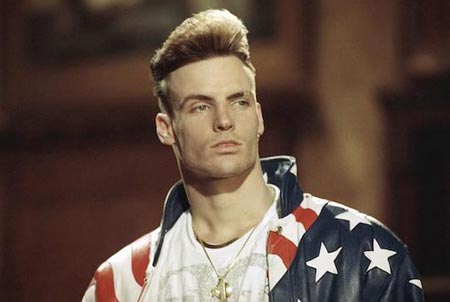 Here’s an interesting (!?) casting news for today. Especially if you’re a Vanilla Ice fan (surprise?). Apparently, Robert Van Winkle, or if you prefer Vanilla Ice, is in talks to star in the upcoming Columbia Pictures comedy titled I Hate You Dad, together with Adam Sandler. On the other hand, Gossip Girl star Leighton Meester is also in talks to play Sandler’s future daughter-in-law. See, I told you that it’s an interesting cast. Sean Anders and John Morris (Sex Drive) are directing I Hate You, Dad from a screenplay by David Wain and Ken Marino (Wanderlust), who rewrote David Caspe’s original script. The movie follows “a father who moves in with his son and his fiancée, only to immediately start feuding with the bride-to-be.” Sandler is on board to play that father, Andy Samberg will play the son and above mentioned Leighton Meester will star as the troublesome fiancée. Vanilla Ice will star as Antonio, a gay wedding coordinator!? from Long Island. James Caan is also in talks to join the cast, and if everything works out fine, he will star as Meester’s on-screen father. Adam Sandler is producing the movie, through his Happy Madison banner along with Jack Giarraputo and Heather Parry. I Hate You Dad is scheduled for release on June 15, 2012.
Continue Reading
Advertisement
You may also like...
Related Topics:Adam Sandler, I Hate You Dad, Leighton Meester, Vanilla Ice