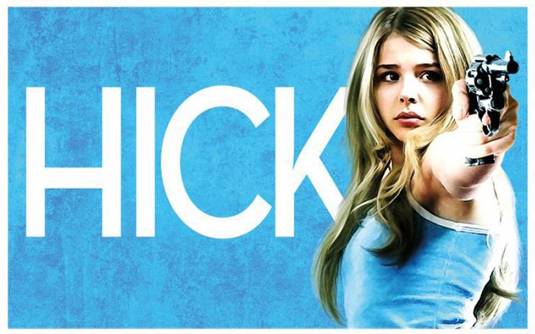 The red band trailer for the adaptation of Andrea Portes’ novel, Hick is sure to grab your attention. A relentless rock-n-roll soundtrack filled with twangy guitars and words like INNOCENT, HONEST, BRUTAL, EMOTIONAL and CONTROVERSIAL are splashing across the screen in white letters… No doubt that Portes adaptation of her coming-of-age novel is one gritty tale about Luli (Chloe Moretz), a 13-year-old Nebraskan girl who, armed with her smarts and a pistol hitchhikes her way west after she runs away from her alcoholic and abusive parents. She’s taken in by Glenda (Blake Lively), a hard-living cocaine-snorting grifter who takes Luli under her wing. Yes, there’s also Eddie (Redmayne), an unstable rebel with questionable motives… Derick Martini‘s Hick made its official debut at the Toronto International Film Festival last fall, but arrives in theaters and on demand next month, on May 11th. Juliette Lewis, Rory Culkin and vet actor Alec Baldwin also co-stars, so you can now check the red band trailer out.

Vampire History Being Introduced in a New DARK SHADOWS Featurette
Watch: First Trailer for Judd Apatow’s THIS IS 40
Advertisement