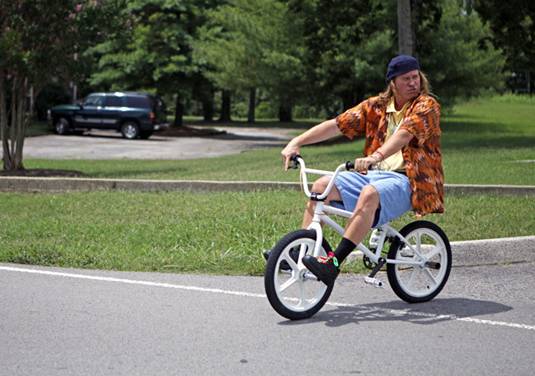 Premiering at this year’s Tribeca Film Festival next month, The Fourth Dimension is the omnibus project featuring Val Kilmer as an oddball motivational speaker who thought ‘arson was cool.’ You can see him on a BMX bike in the photo above and we see him do his thing at a roller rink in a new short from Harmony Korine. Little is known about the project, other than the film is divided into three short films with each directed by Jan Kwiecinski (Incydent, Cigarette Break), Aleksey Fedorchenko (Silent Souls) and Korine (Gummo, Trash Humpers). The film is co-written by Harmony Korine, Alexey Fedorchenko, Jan Kwiecinski, Oleg Loevsky, and Yaroslava Pulinovich. In addition, a Russian scientist builds a time machine in his apartment, and four friends stumble upon an abandoned village in the Polish countryside, while all are in search of the fourth dimension, which looks just as out there as it sounds. [youtube]http://www.youtube.com/watch?v=TMi9b7Qi15U[/youtube]
Continue Reading
Advertisement
You may also like...
Related Topics:Harmony Korine, Tribeca Film Festival, Val Kilmer