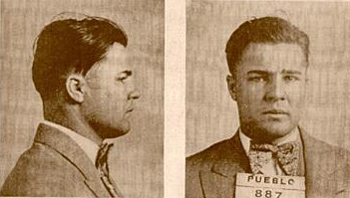 We all remember this director from a title Running Scared, so we’re looking forward to see what Wayne Kramer can do with a crime thriller about 20s and 30s bank robber Charles Arthur Floyd. This name definitely sounds familiar! Maybe he’s no Robin Hood, but he became known as “Robin Hood of the Cookson Hills,” despite being wanted by the FBI for killing Kansas City police officers. So, Wayne Kramer will direct the biopic from Kevin Bernhardt‘s script with an eye on modernizing the tone of the story. Here’s what he had to say about this project: “My approach is to bring 21st century style and energy to Kevin Bernhardt’s meticulously researched screenplay without sacrificing the verisimilitude of the period or over-sensationalizing the characters themselves… At the heart of ‘Pretty Boy Floyd’ is a great love story about an outlaw on the run who can’t stay away from the woman he loves, no matter how destructive the relationship is for both of them – which ultimately leads to his demise”. Love story?! Hm, ok… And yes, Charles Arthur Floyd, better known as Pretty Boy Floyd had a little role in Michael Mann‘s Public Enemies, but looks like that just wasn’t enough. That’s why this gangster is finally getting a movie of his own. Maybe this director got himself a nice project, since we all remember he recently directed Harrison Ford in the immigration drama Crossing Over and previously directed the completely crazy and above mentioned Paul Walker thriller Running Scared. At this moment we also know that Myriad’s Kirk D’Amico will produce Pretty Boy Floyd.
Continue Reading
Advertisement
You may also like...
Related Topics:Wayne Kramer