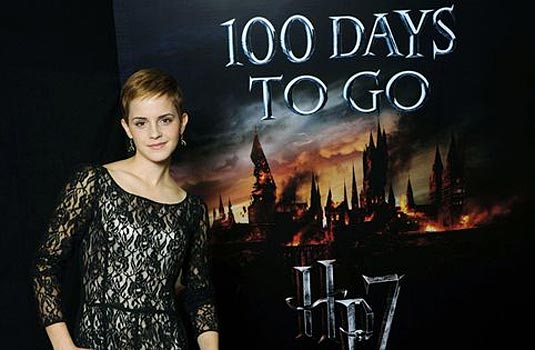 To celebrate the 100-day countdown to the opening of the hugely anticipated Harry Potter and the Deathly Hallows Part 1, Emma Watson who plays Hermione Granger today announced that 100 tickets for the World Premiere will be given away via a new app on the Harry Potter UK Page on Facebook. http://www.facebook.com/HarryPotterUK The new app, Join The Final Battle, will give fans in the U.K. and Ireland the chance to win fantastic Harry Potter prizes such as premiere tickets and film-related merchandise. This is the first social media application for Harry Potter and the Deathly Hallows that will engage with fans of the blockbuster franchise over the next 18 months. Harry Potter and the Deathly Hallows, the seventh and final adventure in the Harry Potter film series, is a much-anticipated motion picture event to be told in two full-length parts. Part 1 begins as Harry, Ron and Hermione set out on their perilous mission to track down and destroy the secret to Voldemort’s immortality and destruction – the Horcruxes. On their own, without the guidance of their professors or the protection of Professor Dumbledore, the three friends must now rely on one another more than ever. But there are Dark Forces in their midst that threaten to tear them apart. Meanwhile, the wizarding world has become a dangerous place for all enemies of the Dark Lord. The long-feared war has begun and Voldemort’s Death Eaters seize control of the Ministry of Magic and even Hogwarts, terrorizing and arresting anyone who might oppose them. But the one prize they still seek is the one most valuable to Voldemort: Harry Potter. The Chosen One has become the hunted one as the Death Eaters search for Harry with orders to bring him to Voldemort…alive. Harry’s only hope is to find the Horcruxes before Voldemort finds him. But, as he searches for clues, he uncovers an old and almost forgotten tale – the legend of the Deathly Hallows. And if the legend turns out to be true, it could give Voldemort the ultimate power he seeks. Little does Harry know that his future has already been decided by his past when, on that fateful day, he became “the Boy Who Lived.” No longer just a boy, Harry Potter is drawing ever closer to the task for which he has been preparing since the day he first stepped into Hogwarts: the ultimate battle with Voldemort. Harry Potter and the Deathly Hallows is directed by David Yates, who also helmed the blockbusters “Harry Potter and the Order of the Phoenix” and “Harry Potter and the Half-Blood Prince.” David Heyman, the producer of all of the Harry Potter films, produced the film, together with David Barron. Screenwriter Steve Kloves adapted the screenplay, based on the book by J.K. Rowling. Lionel Wigram is the executive producer. Heading the cast, Daniel Radcliffe, Rupert Grint and Emma Watson reprise their roles as Harry Potter, Ron Weasley and Hermione Granger. The film’s ensemble cast also includes Helena Bonham Carter, Robbie Coltrane, Tom Felton, Ralph Fiennes, Brendan Gleeson, Richard Griffiths, John Hurt, Jason Isaacs, Helen McCrory, Bill Nighy, Miranda Richardson, Alan Rickman, Maggie Smith, Timothy Spall, Imelda Staunton, David Thewlis, Julie Walters and Bonnie Wright. Warner Bros. Pictures presents a Heyday Films production, Harry Potter and the Deathly Hallows, which marks the latest installment in the most successful film franchise of all time. Harry Potter and the Deathly Hallows – Part 1 will be released worldwide starting November 19, 2010, and “Part 2” starting July 15, 2011. 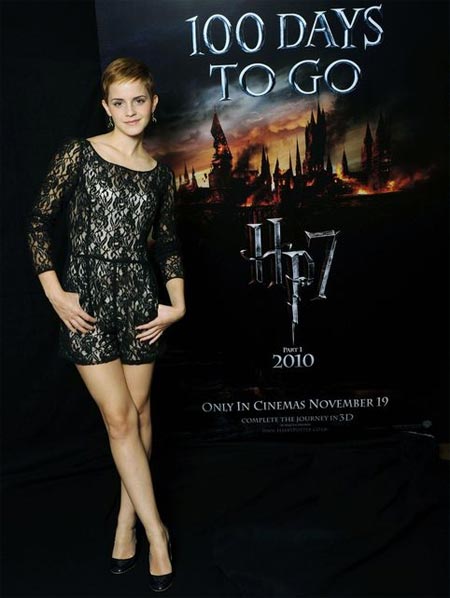 Daniel Radcliffe, Emma Watson and Rupert Grint are walking down the red carpet in London’s Leicester Square along with their fellow co-stars and film crew… Emma Watson said in an interview today that after working with the films for 10 years, she feels that a part of her is retiring. While Rupert Grint said it’s the ‘end of an era’, but the actors will no doubt be all smiles for the premiere tonight, despite their sadness. Harry Potter and the Deathly Hallows: Part One will be shown simultaneously in both the Odeon Leicester Square and Empire Leicester Square for the screening.
Continue Reading
Advertisement
You may also like...
Related Topics:Bill Nighy, Daniel Radcliffe, David Yates, Emma Watson, Harry Potter and the Deathly Hallows, Jason Isaacs, John Hurt, Ralph Fiennes, Rupert Grint