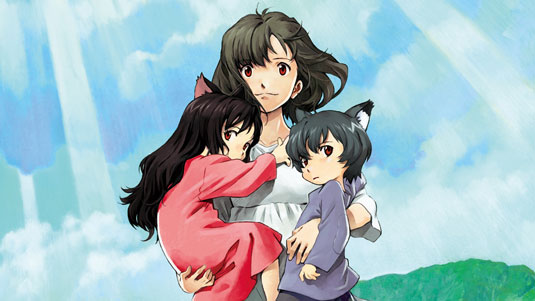 The official website for the Aero Theatre in Santa Monica, California lists that it will screen Hiroyuki Okiura‘s A Letter to Momo film on April 26th and Mamoru Hosoda‘s Wolf Children film on April 27th, 2013. Both screenings will begin at 7:30 p.m. A Letter to Momo follows a girl named Momo who struggles with her father’s sudden passing and her move to the countryside. Momo finds an otherworldly surprise at her new home. Okiura spent seven years planning, writing, storyboarding, and directing the film; it is his first return to the proverbial director’s chair since Jin-Roh in 2000. The film held its world premiere at the Toronto International Film Festival in 2011. The distribution company GKids originally planned to release the A Letter to Momo film in North America at the end of last year, but pushed the theatrical debut back to qualify for the 2013 Oscars. Okiura recently won a MEXT Art Encouragement award for his work on the film. 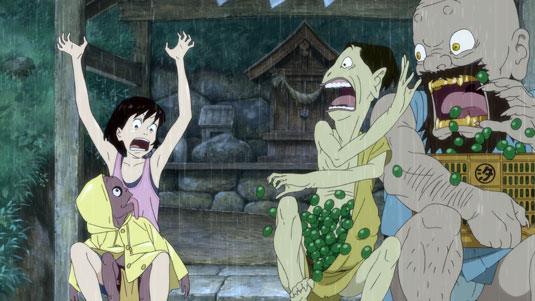 Wolf Children covers 13 years and begins with a 19-year-old college student named Hana who encounters and falls in “fairy tale-like” love with a “wolf man.” After marrying the wolf man, Hana gives birth and raises two wolf children — an older sister named Yuki (“snow”) who was born on a snowy day, and a younger brother named Ame (“rain”) who was born on a rainy day. When the wolf man suddenly dies, Hana decides to move to a rural town far removed from the city. Funimation licensed Wolf Children and plans to release it this year in theaters and on home video. A Letter to Momo won last year’s Grand Prize award at the New York International Children’s Film Festival, and Wolf Children won an Audience Award this year. The same theater also showed a double feature-in of Spirited Away and Porco Rosso on Friday, March 22nd at 7:30 p.m.