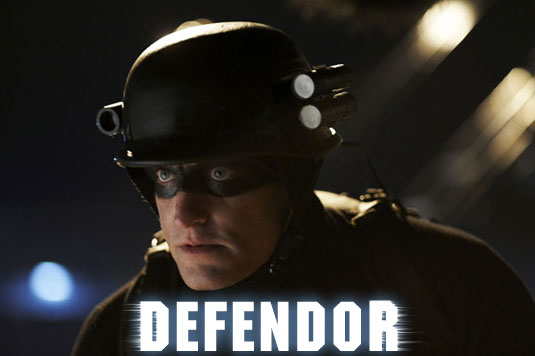 The trailer for the upcoming canadian superhero feature “Defendor” has appeared online. Synopsis: “When night falls and danger emerges from the shadows of Hammer Town’s alleyways, Defendor is the only man who stands between us and the drug-ravaged streets. He is the last bastion of decency, the last honourable man: he is Defendor! But he is also Arthur Poppington (Woody Harrelson), a simple man who lives in the workshop of the construction company that employs him to hold traffic signs. Arthur is a self-made superhero who runs afoul of the law when he lays a beating on an undercover cop, Chuck Dooney (Elias Koteas), who was abusing a young prostitute named Kat (Kat Dennings). Always the hero, Arthur takes Kat to his secret hideout hoping she can help him find his arch-nemesis, the diabolical Captain Industry. Mistakenly convinced that Captain Industry killed his mother, Arthur has made it his mission to track down this enemy at all costs. But in order to do so, he must first overcome his most difficult challenge ever: convincing the court-appointed psychiatrist Dr. Park (Sandra Oh) that he’s sane enough to be on the streets.” Described as a “dramedy, “Defendor” is written and directed by Peter Stebbings. Starring Woody Harrelson, Kat Dennings, Elias Koteas, Sandra Oh, Lisa Ray, Kristin Booth, Michael Kelly, Charlotte Sullivan and Lyriq Bent in the supporting roles. The film will screen at the Toronto Film Festival on September 12th and 16th, and below you’ll get a look at the trailer:
Continue Reading
Advertisement
You may also like...
Related Topics:Elias Koteas, Kat Dennings, Toronto Film Festival, Woody Harrelson