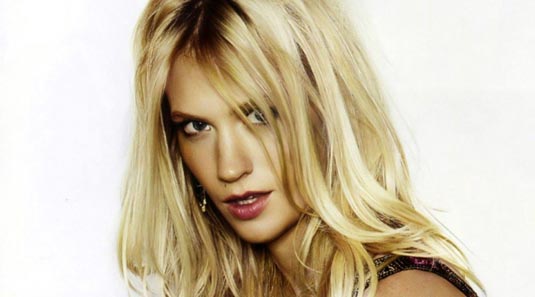 Ever since the announcement of X-Men: Days of Future Past, the cast has only grown, but now it seems there’s one character that just might not be returning. January Jones, who played Emma Frost in X-Men: First Class, said she doesn’t know anything about the film in an interview with Collider. “I don’t know that I’m in it, I don’t think Emma’s in this one. Well they haven’t told me if I am (laughs). I wouldn’t put it past them though, I got the script for the first one on the airplane on the way there. It’s called Days of Future Past I think, and I think it’s more about James [McAvoy] and Michael [Fassbender] and then Patrick [Stewart] and Ian [McKellan], and I think it’s gonna go back and forth with those so I don’t think Emma’s in those bits. I don’t know, I really don’t know.” As Ms. Jones said, Ian McKellen, Patrick Stewart, James McAvoy and Michael Fassbender are all confirmed to return for the film, along with Jennifer Lawrence, Nicholas Hoult, and Hugh Jackman. X-Men and X-Men 2 director Bryan Singer also returns behind the camera. Scheduled for release on July 18th, 2014, X-Men: Days of Future Past features a script by Simon Kinberg and is said to be inspired Chris Claremont and John Byrne’s comic book storyline that ran in “Uncanny X-Men” #141 and 142 back in 1981. “Days of Future Past” was first arc that introduced the idea of an alternate future for Marvel’s mutants that grew out of the Brotherhood of Evil Mutants killing an important senator, leading to a future where all mutants are hunted by Sentinels. It was also featured in 1992’s X-Men: The Animated Series that ran for five seasons.
Continue Reading
Advertisement
You may also like...
Related Topics:Bryan Singer, Hugh Jackman, Ian McKellen, James McAvoy, January Jones, Jennifer Lawrence, Michael Fassbender, Nicholas Hoult, Patrick Stewart, Simon Kinberg, X-Men: Days of Future Past