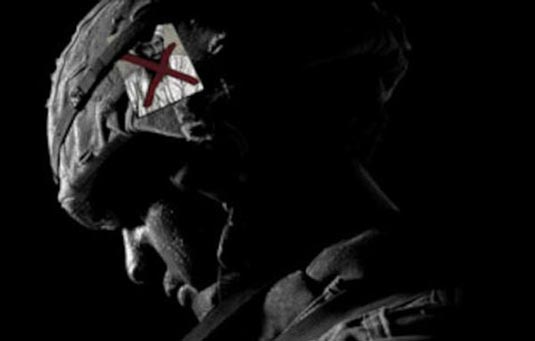 Here we have a new treat – the posters for Zero Dark Thirty, director Kathryn Bigelow‘s pic about the ten-year chase for Osama Bin Laden. Have a look:

See how it reflects the effects used in the recently released trailer? I just wish they didn’t black out the release date this much, but then again, maybe it was intentional, as a ‘case closed’ counterpart of the poster below:

This image depicts what appears to be another dedicated, yet dutifully war-loving marine, who wears his enemy’s photo on helmet not as a badge of courage, but as a zealous mark of pack-prescribed identity. The shadow which surounds his profile – I guess it represents the ‘american hero’ template, with a subtle element of subversion, with the tagline ‘And justice for all’ adding finish. Zero Dark Thirty lands in theaters on December 19th, 2012, and it stars Jessica Chastain, Joel Edgerton, Scott Adkins, Mark Strong, Jennifer Ehle, Chris Pratt, Taylor Kinney and others.
Continue Reading
Advertisement
You may also like...
Related Topics:Chris Pratt, Jennifer Ehle, Jessica Chastain, Joel Edgerton, Kathryn Bigelow, Mark Strong, Scott Adkins, Taylor Kinney, Zero Dark Thirty