Charles Dickens’ beloved holiday story “A Christmas Carol” gets the 3D treatment, and the result is a visually stunning big-screen experience I’m sure many cinema goers out there will enjoy to the fullest extent. As far as I’m concerned, my feelings about this one are mixed. The story doesn’t really require a lengthy introduction. The holiday season is in full swing, and Ebenezer Scrooge (Jim Carrey) despises Christmas and everyone celebrating it. Then he’s visited by three ghosts who take him on an emotional journey, and before you know it, his meanness is gone for good…read more [ScreeningLog] It’s hard to believe that Charles Dickens wrote A Christmas Carol 166 years ago, but here we are in 2009 and Robert Zemeckis has spent $180 million to produce a motion-capture animated film that retells the famous story. The movie opens this weekend on more than 2,000 digital 3D screens and features the voices of Jim Carrey, Gary Oldman, Colin Firth, Bob Hoskins, Cary Elwes and Robin Wright Penn. Despite first being published on December 19, 1843, A Christmas Carol remains one of the most popular, heart-warming holiday tales ever written. I’m sure you don’t need a recap of Scrooge’s encounters with the ghosts of Christmas Past, Present and Future…read more [Empire Movies]

Belle, voiced by Robin Wright Penn, Ebenezer Scrooge, voiced by Jim Carrey and Fred, voiced by Colin Firth, are shown in a scene from A Christmas Carol. If you’ve seen any incarnation of Charles Dickens’s “A Christmas Carol” the best way to describe this latest attempt is to call it a stripped down non-inventive take on the classic Christmas story that wears on too long and is just plain dull. By the time I hit the Ghost of Christmases Yet To Come I was ready to check out, I knew what was coming and wasn’t expecting any deviation. I won’t say I was ever bored beyond reproach, but I was never moved and certainly never felt a kinship with any of the characters whose dull and lifeless eyes and facial features are far from inviting. The putty-like facial issues and non-responsive eyes have flummoxed Zemeckis since The Polar Express in 2004 and there is very little sign of improvement here. Considering the eyes are the gateway to the soul, a lot is missing when the spark isn’t there…read more [RopeOfSilicon]

Earlier I said there are two ways to perceive the film. There might be a third: Separate but equal, meaning evaluate the effects as one thing, the story and all the rest as another. Let’s try that. The performance capture is otherworldly. Again, we can chart the progress in Zemeckis’ ongoing experiment, and he’s very close to giving us a photorealistic form of animation now. I still can’t believe animators will ever get the eyes just right, and it’s all the eyes, when you get right down to it. Supposing I’m right, the performance capture will always be limited when it comes to these characters expressing appropriate emotions, but Zemeckis has already come a very long way in just a matter of a few years, so maybe the solution is out there…read more [GetTheBigPicture] What made me enjoy A CHRISTMAS CAROL was the fact that, despite having been filmed literally hundreds of times, the story still managed to suck me in. For the most part, Zemeckis and co., have stayed remarkably true to the original text, and the dialogue as not been dumbed down at all. Carrey’s an absolutely incredible Scrooge, boasting a fantastic and accurate sounding English accent. While Alistair Sim is still the greatest Scrooge, Carrey comes pretty close, and probably ranks alongside Michael Caine (from the underrated MUPPET’S CHRISTMAS CAROL) as my second favorite Scrooge (I’m not counting Bill Murray, as he didn’t technically play Scrooge in SCROOGED)…read more [Joblo] 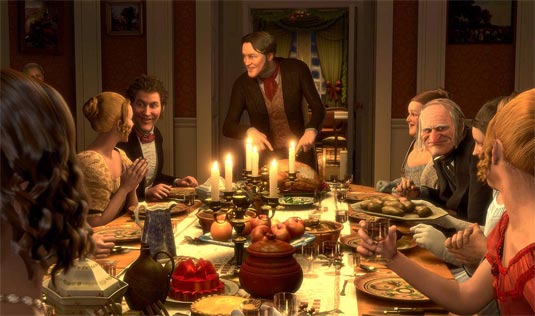 Carrey’s duty as not only Scrooge but also the three spirits makes thematic sense but nonetheless comes off as a sore-thumb distraction, as does Oldman’s double-dip as Tiny Tim, here relegated to catchphrase-spouting peripheral prop. Carol is often alight with wondrous imagery tinted with malevolence, sorrow, and regret, from the ethereality of the candle-shaped Ghost of Christmas Past, to the chuckling Santa-Zeus Ghost of Christmas Present (who accosts Scrooge with the type of zombie-ish criminal and whore for whom the money lender has such disdain), to Scrooge clinging to the shadowy Ghost of Christmas Yet-to-Come’s bony finger so as not to plunge into his own cavernous grave…read more [SlantMagazine] A Christmas Carol: Featurette – The Story There’s little point recapping the story of A Christmas Carol here, given that virtually everyone reading this is likely to be very, very familiar with it. But if you’ve been schooled on The Muppets/Black Adder/Bill Murray/Alistair Sim, this new version is quite a different beast. The opening of the film, for instance, commences in a very Disney way with a storybook opening and us being pulled into the pages as the covers open. Yet, the first shot proper turns out to be a still image of Jacob Marley’s corpse. It’s a terrific shot, and one of many in the film that makes you feel that 3D technology on the big screen might have a big future to it after all. It also sets the tone very much for what’s to come…read more [DenOfGeek]

I remain unconvinced that 3-D represents the future of the movies, but it tells you something that Zemeckis’ three 3-D features (also including “Beowulf”) have wrestled from me 11 of a possible 12 stars. I like the way that Zemeckis does it. He seems to have a more sure touch than many other directors, using 3-D instead of being used by it. If the foreground is occupied by close objects, they’re usually looming inward, not out over our heads. Note the foreground wall-mounted bells that we look past when Scrooge, far below, enters his home; as one and then another slowly starts to move, it’s a nice little touch…read more [RogerEbert-SunTimes] A Christmas Carol: Joy to the World Clip
Continue Reading
Advertisement
You may also like...
Related Topics:A Christmas Carol, Bill Murray, Colin Firth, Gary Oldman, Jim Carrey, Robert Zemeckis, Robin Wright Penn