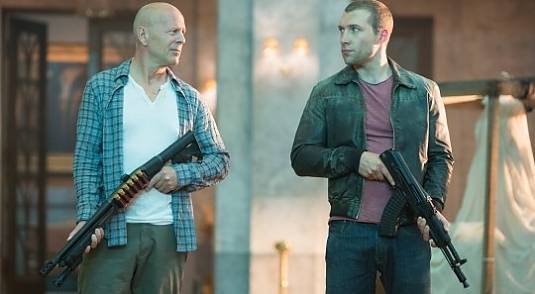 Is that all you got – asks Bruce Willis in this completely new TV spot for the upcoming A Good Day to Die Hard movie which opens next month! Hard language? Intense or persistent violence? A lot of action? Just name it, this movie has it all! As you’re going to see – we finally have a chance to say – the R rating makes sense! Check out the rest of this report to watch the video, and let us know what you think!

As you already know, Skip Woods wrote the script and John Moore directed the fifth installment of the Die Hard film series. The movie stars Bruce Willis as John McClane who, this time travels all the way to Russia to help his son who is caught in the crossfire of a terrorist plot. The rest of the cast includes Jai Courtney, Sebastian Koch, Yulia Snigir, Cole Hauser, Amaury Nolasco, Megalyn Echikunwoke, Anne Vyalitsyna and A Good Day To die Hard is already set to open on February 14th, 2013.

Since the first Die Hard in 1988, John McClane has found himself in the wrong place at the wrong time, with the skills and attitude to always be the last man standing, making him enemy #1 for terrorists the world over. Now, McClane faces his greatest challenge ever, this time on an international stage, when his estranged son Jack is caught up in the daring prison escape of a rogue Russian leader, and father and son McClane must work together to keep each other alive and keep the world safe for democracy.

Click on the images to take a better look & stay tuned for more!