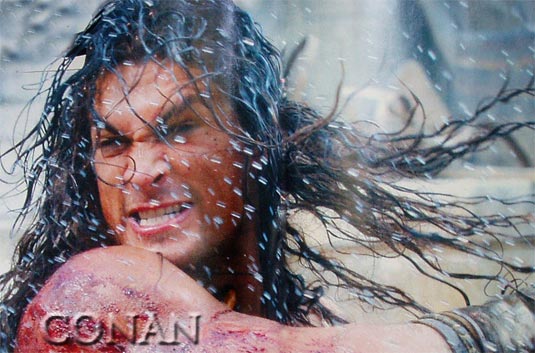 Conan Movie Blog has posted a great new image of Jason Momoa as Conan. The name of the movie appears to be staying as Conan. A second telling of the character by Robert E. Howard,  is the story of a Cimmerian barbarian named Conan (Momoa) and his adventures across the continent of Hyboria on a quest to avenge the murder of his father and the slaughter of his village at the hands of Khalar Singh (Avatar’s Stephen Lang). Joining Momoa and Lang in the film is Ron Perlman (Hellboy) as Conan’s father, Rose McGowan (Grindhouse) as Marique, Rachel Nichols (GI Joe) as Tamara, and Bob Sapp as Ukafa. The film is directed by Marcus Nispel. Conan is set for release in the summer of 2011.