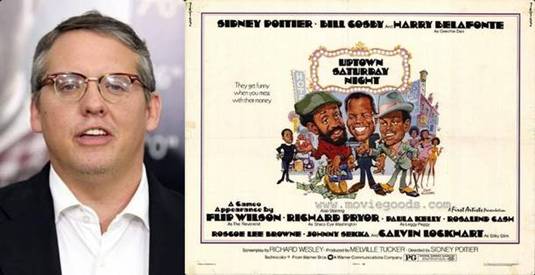 Well, Warner Bros. is planning a big screen remake of the 1974 comedy Uptown Saturday Night, and it appears writer/director Adam McKay is lining up to board Warners’ remake of a Bill Cosby and Sidney Poitier-led comedy. McKay is currently deep into writing the script for the long-awaited sequel to Anchorman with Will Ferrell, but he is in talks to develop the project that has been in development for years with Will Smith and Denzel Washington attached to star. The original Uptown Saturday Night got a good hook and it is the perfect sort of film to remake; centers on two friends who, after going to a shady nightclub, need to recover a stolen wallet with a high-stakes lottery ticket embedded inside.The film was a crossover commercial hit. David Dobkin (Wedding Crashers) was previously attached to direct, but as it appears now McKay will take the helm and production will get going after he shoots Anchorman 2, which means in early 2013 for a 2014 release; the sooner the better for Uptown Saturday Night. [youtube]http://www.youtube.com/watch?v=Ry97Nueni_c[/youtube]
Continue Reading
Advertisement
You may also like...
Related Topics:adam mckay, Denzel Washington, Will Smith

Rooney Mara to Star in BROOKLYN
THE PLACE BEYOND THE PINES With Ryan Gosling and Bradley Cooper to be Released in September?
Advertisement