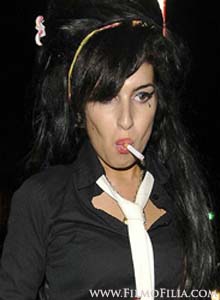 It’s been recently reported that Amy Winehouse will pen and sing the new James Bond theme song, according to the UK’s The Sun. But only if Amy stays off drugs the next two months, she must be clean by April. A source says: ‘That’s when the Bond people make a final decision on who sings the theme. If Amy is clean then, it’s hers.’ Singer could follow in footsteps of Madonna, Paul McCartney and Shirley Bassey and I think that would be great. Ok, she has problems but Amy is great singer and in my opinion, she deserves it. Of course, Amy is still ‘open question’ and Craig claims that they won’t even think about who sings the track until work on the movie has progressed further. “Everyone’s speculating about it but we’ve got other things to deal with, there’s no point in writing the song for a movie when we haven’t got a movie.”
Continue Reading
Advertisement
You may also like...
Related Topics:Amy Winehouse, Daniel Craig, Quantum of Solace