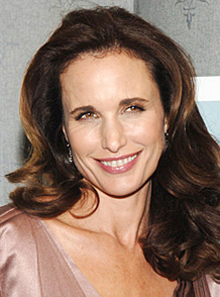 So, we already know that new Footloose, the remake of the 1984 hit is coming, and here we are for a little interesting casting update! Golden Globe Award nominee Andie MacDowell has joined the cast that already includes Kenny Wormald as Ren McCormack, Julianne Hough as Ariel Moore, Miles Teller as Willard and Dennis Quaid as Rev. Shaw Moore MacDowell will be playing the role of Vi Moore, the wife of Dennis Quaid’s Reverend Shaw Moore, who despises the music the kids of his sleepy Southern town listen to, and who tries to ban rock and roll music – characters originally played by John Lithgow and Dianne Wiest in the original movie. Familiar couple, because you’ll remember that MacDowell and Quaid previously played husband and wife in the 2001 film Dinner with Friends. Let us just remind you that Footloose tells the story of a young man who moves to conservative, religious town where his love for dancing is viewed as a threat by the locals. The original movie with Kevin Bacon in the leading role was nominated for two Oscars and has developed a cult fan base, making it one of the best loved films of the 80s. Craig Brewer is in charge for directing a remake (the project had initially been set up for High School Musical director Kenny Ortega), the script is being written also by Brewer, while Dean Pitchford, the writer of the original film, will be producing. Brewer sought to return the film to its original drama, wrapped up in teen angst, parental control, religious repression, and small-town malaise. Footloose will begin production this fall and will open in theatres on April 1, 2011.
Continue Reading
Advertisement
You may also like...
Related Topics:Andie MacDowell, Craig Brewer, Dennis Quaid, Footloose, Julianne Hough, Kenny Wormald, Miles Teller