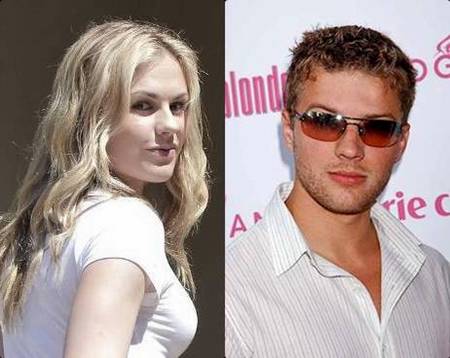 The second-youngest Oscar winner in history after Tatum O’Neal, Anna Paquin and Pulitzer-Prize winning photographer Greg Marinovich in The Bang-Bang Club, Ryan Phillipe have both signed on to star in the indie comedy Straight A’s. Production on the comedy begins under the direction of James Cox (Wonderland), today in Shreveport, Louisiana. Dave Cole has written the script. Phillippe will take on the role of a man who has been in and out of rehab for ten years and returns home haunted by his dead mother’s ghost who’s urging him to go back to his family, who he left behind. But, his brother’s wife (Anna Paquin) still has feelings for him as he was her first love. Wunderkind Paquin (The Piano) becomes sexy star of HBO’s schlocky-but-awesome vampire show, ‘True Blood,’ which starts its fourth season on June 26th. True Blood’s Sookie Stackhouse will be seen next month in Fox Searchlight’s Margaret. Ryan Phillippe also began acting as a teenager and found fame in 1992 playing a gay youth in daytime drama One Life to Live. He enjoyed a successful Hollywood career with films including Cruel Intentions, Gosford Park and Oscar-winning drama Crash. The actor was most recently seen opposite Matthew McConaughey in The Lincoln Lawyer and will appear in Set Up with Curtis ‘50 Cent’ Jackson and Bruce Willis. Watch Paquin and watch Phillipe in trailers below and stay tuned. [youtube]http://www.youtube.com/watch?v=1NE_TMCeBP0[/youtube]