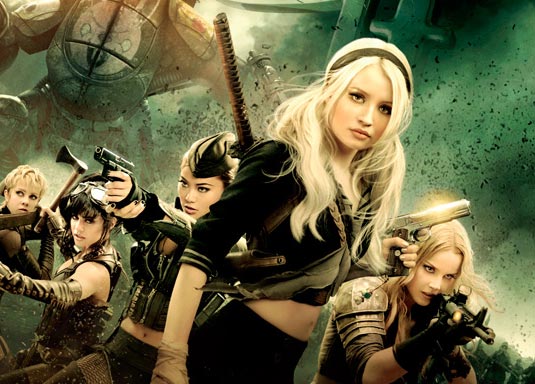 We showed you maybe the largest promotional banner ever a few days ago, but now here’s yet another poster for Zack Snyder’s upcoming fantasy adventure Sucker Punch, starring Emily Browning (The Uninvited), Abbie Cornish (Bright Star), Jena Malone (Into the Wild), Vanessa Hudgens (High School Musical) and Jamie Chung (Sorority Row). The film’s main cast also includes Oscar Isaac (Robin Hood) and Carla Gugino (Watchmen), with Jon Hamm (Mad Men) and Scott Glenn (The Bourne Ultimatum). The film – described by Snyder as “Alice in Wonderland with machine guns” – centres on a girl called Babydoll (Browning) who has been locked away in an institution but finds new freedom in an imaginary realm unrestrained by the boundaries of time and place. She urges four other young girls – the outspoken Rocket (Jena Malone), the street-smart Blondie (Vanessa Hudgens), the fiercely loyal Amber (Jamie Chung) and the reluctant Sweet Pea (Abbie Cornish) – to band together and try to escape their terrible fate at the hands of their captors, Blue (Oscar Isaac), Madam Gorski (Carla Gugino) and the High Roller (Jon Hamm). Led by Babydoll, the girls engage in fantastical warfare against everything from samurais to serpents and must decide what they are willing to sacrifice in order to stay alive. With the help of a Wise Man (Scott Glenn), their unbelievable journey – if they succeed – will set them free. Sucker Punch opens on March 25, 2011.