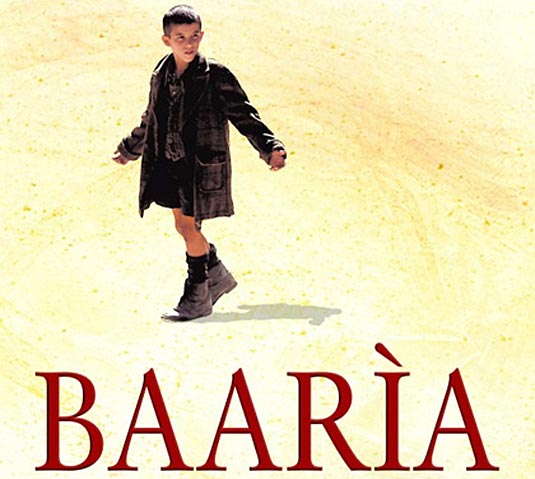 Today we have a poster, trailer and photos from Giuseppe Tornatore‘s latest movie “Baaria,” an epic tale spanning three generations from the 1930s to modern times, has the rise of fascism, World War II and Italy’s postwar political jockeying as its backdrop. “Baaria” synopsis: Baaria is Giuseppe Tornatore’s lush and romantic reimagining of the path of one person, a Sicilian who grows, marries, has children, matures and ages, compiling a rich breadth of experiences along the way. It is also the tale of a typical village and the entertaining dynamics of small-town life where everyone knows everyone else’s business. Tornatore is a master at recreating memories and the sensations that accompany them. His eye for detail and the magic moment is on full display in a film that will remind many of his magnificent Cinema Paradiso. Peppino, the nickname of the boy at the story’s heart, is a tough little kid in the thirties, used to the rough-and-tumble world of Baaria (local slang for Tornatore’s native Bagheria), a hot and dusty Sicilian village with one main street. His adventures are many and his memories singular: men gambling in the local square, goats eating his schoolbooks, and the enchantment of silent film screenings. All of this plays out against the darker canvas of black-shirted fascists strutting in the streets, the declaration of war and the ecstatic moment of liberation when the Allies land on the island. Slowly, a man and an individual is formed. In the chaotic tumult of post-war Baaria, Peppino (now played by Francesco Scianna) joins the Communist Party. Coming from a poor family and witnessing the humiliations meted out by the local landowners, he feels that socialism is the road to justice and a fairer world. When he falls head over heels for the raven-haired Mannina (Margareth Madè), however, her parents hold his party membership against him. As Peppino ages, success rubs up against failure, and pain mingles with happiness. In Baaria, life can be simple or complicated, full of humour or sadness, but it is never uninteresting; it simply flows.Tornatore is in love with his world, his characters and his landscape. Everything comes alive under his touch. He has an unerring ability to summon the dreams and aspirations of a young man fighting for his beliefs, while also revelling in the exuberance and comedy of existence. Baaria captures the wonder of a lifetime of living.

“Baaria” stars  Francesco Scianna, Margareth Made, Nicole Grimaudo, Lina Sastri, Salvo Ficarra, Valentino Picone, Enrico Lo Verso and Nino Frassica. Rounded out by cameos from some of Italy’s top names, including Michele Placido, Luigi Lo Cascio, Monica Bellucci, Raoul Bova and Paolo Briguglia, “Baaria” was the opening night attraction at the 2009 Venice International Film Festival. The film is nominated for the annual Golden Globe Award for Best Foreign-Language Film. The film is the longtime dream of Tornatore, who won the Oscar in 1998 for “Cinema Paradiso,” although the 53-year-old director said he thought he would end up doing it later in his life. Tornatore said:

The film doesn’t want to be just about Sicily, Sicily, Sicily. The idea was to tell the life of a chorus of characters inside a microcosm, which is a village, where you hear continually the echo of everything is happening around you, the echo of everything that is happening far away.  (It’s) about a place that ends up being a bit of an allegory of all the places where we were born.

I grew up in a family that didn’t just teach us how to dress for school, or how to hold a fork. One of the first things you needed to learn was how to behave in the world, how to respect others and above all, to dream. We learned how important civil responsibility is. This is one of the things, one of the many things, lost in our country.”

The film was shot mostly in Tunisia, where the set designers erected a likeness of Bagheria, the Italian name of the town known as “Baaria” in the Sicilian dialect. Over the course of the movie, the set of “Baaria” expanded from a village surrounded by arid hills to a town of low-rise buildings teeming with traffic. 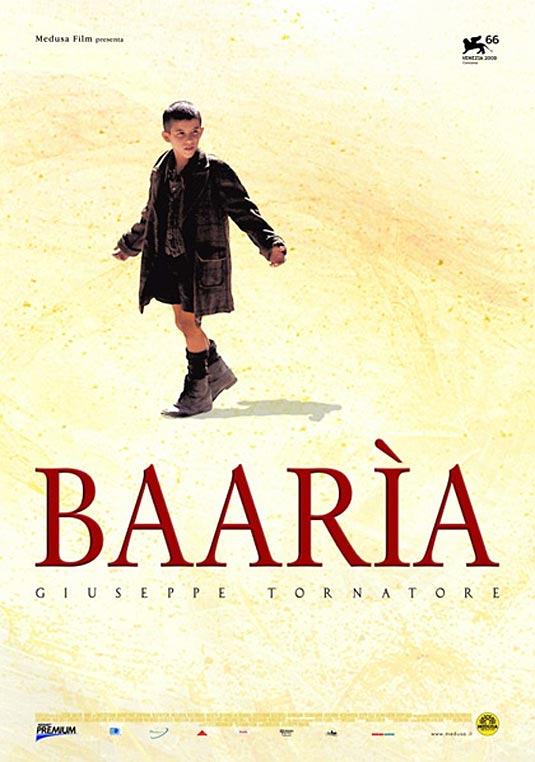 Baaria Poster Ennio Morricone, who rose to fame for his music for Sergio Leone‘s 1960s westerns, composed the score, his eighth for a Tornatore film. He said it was important for a composer not to overdo a film musically.

“Despite loving the film very much, I believe I didn’t go overboard this time. I didn’t shoot all the artillery toward the sky I believe, except in some moments,” Morricone said.

With a price tag of $35.5 million, produced by Medusa, it is among the most expensive Italian films ever. “Baaria” photos: