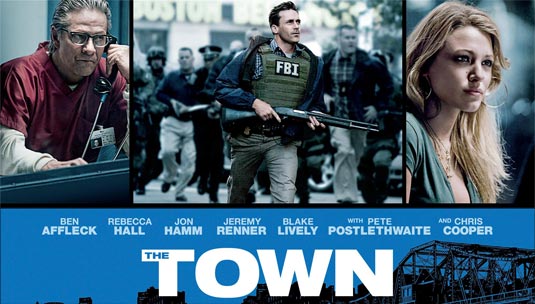 A new poster for the upcoming movie The Town has been revealed. Ben Affleck directs and stars in a crime drama based on the book Prince of Thieves by Chuck Hogan. The Town centers on Doug MacRay, a career thief whose last bank robbery with his gang has changed his life. Naturally, it’s a woman at the heart of his dilemma: Claire (“Vicky Cristina Barcelona’s” Rebecca Hall) the bank manager whose life was traumatized by the robbery. Doug and Claire begin to have feelings for each other, but unbeknownst to Claire, he’s at the heart of her turmoil.  The excellent Jeremy Renner stars as a fellow thief, “Mad Men’s” Jon Hamm as the FBI agent out to hunt Doug and “Gossip Girl’s” Blake Lively as a Boston stripper. Affleck co-wrote the screenplay with Peter Craig (Waterbug) and Sheldon Turner (Up in the Air). Warner Bros will be bringing The Town to theaters this September 17th, 2010.