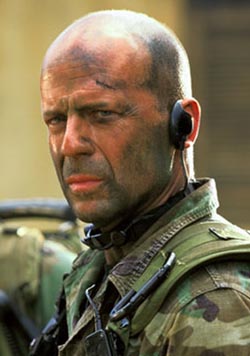 Bruce Willis confirmed that he will shoot a cameo for “The Expendables” in an interview with MTV. Willis will soon join Sylvester Stallone and Arnold Schwarzenegger to shoot a very special scene for the action movie. He confirmed that the scene will involved himself, Arnold and Sly together on camera. “That’s the concept. That’s the plan.” “I haven’t united with them. I’m waiting for a call from Sly about when we’re going to try and make that happen,” Willis explained “I don’t know anything about [my character] yet, haven’t seen any pages yet,” he said. “But I’m excited about it.” “I want to send best wishes to Sly, and the Governor of California, my old pal Arnold.” So, Bruce Willis joins massive cast of action heroes such as Dolph Lundgren, Jason Statham, Jet Li, Mickey Rourke, Steve Austin, Terry Crews, Eric Roberts, Randy Couture, Danny Trejo, Charisma Carpenter, Curtis Jackson, Brittany Murphy and David Zayas. “The Expendables,” written and directed by Sylvester Stallone, is about a team of mercenaries led by Barney Ross (Stallone). The team consists of Lee Christmas (Jason Statham), Bao (Jet Li), Gunnar Jensen (Dolph Lundgren), and Emanuel (Mickey Rourke), who head to South America on a mission to overthrow a dictator. “The Expendables” is set to release on April 23rd, 2010.
Continue Reading
Advertisement
You may also like...
Related Topics:Arnold Schwarzenegger, Bruce Willis, Jason Statham, Jet Li, Mickey Rourke, Sylvester Stallone, The Expendables