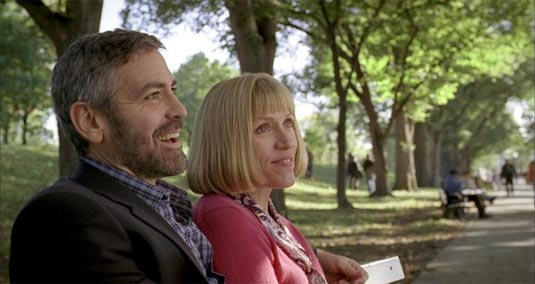 It doesn’t make a lot of sense to follow up a movie as dark as “No Country for Old Men” with one as downright silly as “Burn After Reading,” which is why it works for the Coen brothers. Joel and Ethan have done this before — they made “Raising Arizona” after “Blood Simple“; “The Big Lebowski” followed “Fargo” — and if there’s one thing these brothers savor, it’s upending their audience’s expectations. The only thing people didn’t like about the almost uniformly beloved “No Country” was the film’s controversial ending and its handling of a sudden off-screen death of one of the main characters. In “Burn After Reading,” they push it farther, refusing to show you the chain of events that set the film’s entire blackmail plot into motion. They’re not just messing with you; by taking their last film’s most significant criticism and making it even more noticeable, they’re also making fun of themselves, and that idea of self-parody reverberates through every frame of their latest movie. This is a spy picture in which nobody does any actual spying (at least not for the government; plenty of people are snooping around on their spouses) and where the intelligence community is portrayed as a world inhabited wholly by people without intelligence. Just about everybody whose name appears on the poster is skewering their onscreen persona, the most obvious being the picture’s two biggest stars, George Clooney and Brad Pitt. Pitt actually has a small supporting role. When his name shows up in the credits, it reads “And Brad Pitt.” Read more: IFC.com More Burn After Reading Reviews:   TIFF Review: Burn After Reading [Cinematical] Burn After Reading Movie Review [HollyWood.com] Burn After Reading Review [Metacritic]
Continue Reading
Advertisement
You may also like...
Related Topics:Brad Pitt, burn after reading, Coen brothers, Frances McDormand, George Clooney