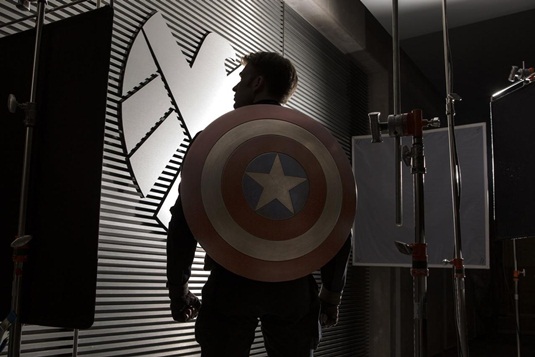 Marvel Studios has announced today that production has officially started on Captain America: The Winter Soldier and provided a first image of Captain America (Chris Evans) in shadow with his iconic shield behind him.

Anthony Mackie as Sam Wilson/Falcon, Frank Grillo as Brock Rumlow, Georges St-Pierre as Georges Batroc and Emily VanCamp as Agent 13 are joining the Marvel Cinematic Universe for the first time. In addition, Robert Redford has joined the cast as Agent Alexander Pierce, a senior leader within the S.H.I.E.L.D. organization.

Captain America: The Winter Soldier will pick up where The Avengers left off, following Evans’ Steve Rogers as he struggles to embrace his role in the modern world and teaming up with Natasha Romanoff to battle a powerful yet shadowy enemy in present-day Washington.

The sequel, set for release on April 4th, 2014, is being directed by brothers Anthony and Joseph Russo from a screenplay by Christopher Markus.