The forecast is sunny side up for Sony Pictures Animation as the studio has reassembled the all-star, comedy voice cast of the animated hit Cloudy with a Chance of Meatballs for Cloudy With a Chance of Meatballs 2, set for release in 3D on February 7, 2014. The first Cloudy film took in $243 million worldwide. The sequel is directed by Cody Cameron (whose story artist credits include Shrek, Madagascar , Surf’s Up and Cloudy with a Chance of Meatballs) & Kris Pearn (head of story on Cloudy with a Chance of Meatballs and story supervisor on Arthur Christmas ) and produced by longtime Sony Pictures Animation producer Kirk Bodyfelt. The lead voice cast from the first film returns, including Bill Hader (Saturday Night Live, Men In Black 3) as inventor Flint Lockwood; Anna Faris (Scary Movie, The House Bunny) as brainy weather girl Sam Sparks; James Caan (The Godfather, Elf) as Flint’s technophobic dad, Tim Lockwood; Andy Samberg (Saturday Night Live, Hotel Transylvania) as Swallow Falls’ local celebrity “Baby” Brent; Neil Patrick Harris (How I Met Your Mother, The Smurfs) as Steve the gummy bear-loving monkey; and Benjamin Bratt (Law & Order, Miss Congeniality) as Sam’s mild mannered cameraman Manny. In addition, Terry Crews (The Expendables 2) joins the cast to take on the role of Earl, the town cop. 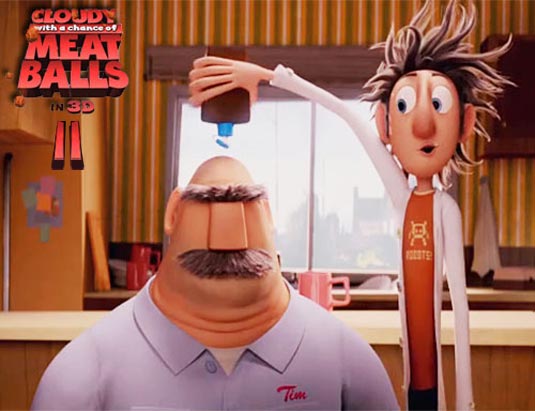 Cloudy With a Chance of Meatballs 2 picks up where Cloudy with a Chance of Meatballs left off. Inventor Flint Lockwood’s genius is finally being recognized as he’s invited by his idol Chester V (Will Forte of Saturday Night Live) to join The Live Corp Company, where the best and brightest inventors in the world create technologies for the betterment of mankind. Chester’s right-hand-gal – and one of his greatest inventions – is Barb (Kristen Schaal of Toy Story 3 and 30 Rock), a highly evolved orangutan with a human brain, who is also devious, manipulative and likes to wear lipstick. It’s always been Flint’s dream to be recognized as a great inventor, but everything changes when he discovers that his most infamous machine – which turns water into food – is still operating and is now creating mutant food beasts. With the fate of humanity in his hands, Flint and his friends must embark on a dangerously delicious mission, battling hungry tacodiles, shrimpanzees, apple pie-thons, double bacon cheespiders and other food creatures to save the world… again! Commenting on the announcement, Sony Pictures Digital Productions’ President Bob Osher, said,

“Cloudy was a tremendous hit acclaimed by critics and audiences alike, and we’re thrilled to be bringing everyone back together for Cloudy 2.” Sony Pictures Animation’s President of Production Michelle Raimo Kouyate added, “Not only are we bringing the old gang back, we are introducing some hilarious new characters in a brand new adventure that matches the wit and freshness of the original. We have a great story and we love Cody and Kris’s take on the characters and material.”