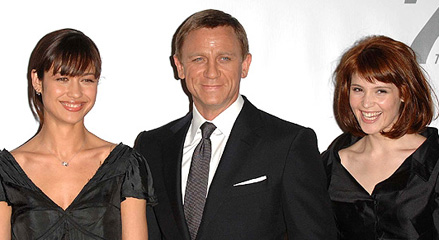 Daniel Craig has spoken at the press conference to promote the 22nd Bond film Quantum of Solace. When quizzed about the ’bewildering’ title, he said: ’We could have gone for a snappier title but that’s not part of the deal…It ties into the plot, it’s not some random title.’ He says that it all connects to Bond’s search for closure on his relationship with Vesper. That could indicate that the meaning of Quantum of Solace is ‘a degree of comfort’. Craig said that this film will be ’more of a classical Bond movie. There’s a touch of Ken Adam (the Bond production designer) and ’60s spy movie’. Maybe this is easing in to a version of the Bond style we know, but with ’Casino Royale’’s more realistic edge. He also added that Bond will be ’misbehaving more this time’ and that we won’t see anything like the torture scene from ’Casino Royale’, because ’Bond’s deaing it out more this time.’ Producer Michael G Wilson also expanded on the continued absence of Moneypenny and Q. He said that in the previous films they’d had to find a moment for each of the characters, which wasn’t necessarily organic. He said they may come back in the future, but only if the story demands it. Co-Producer Barbara Broccoli said that there was a definite possibility of Craig appearing in more Bond movies, but that they were ’taking it one at a time.’
Continue Reading
Advertisement
You may also like...
Related Topics:Daniel Craig, Quantum of Solace