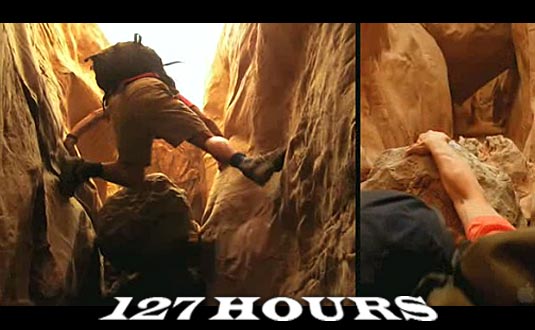 Fox Searchlight has released the first trailer for docu-drama thriller 127 Hours, directed by Danny Boyle. 127 Hours is a biopic based on Aron Ralston’s 2003 struggle to survive in the cold mountains of Utah when his arm got pinned beneath a boulder. After 5 days he amputated the limb using a dull knife, and proceeded to climb a 65-foot sheer wall to reach his freedom. He eventually encountered a family who gave him food and water, and notified the authorities. Synopsis: 127 Hours is the true story of mountain climber Aron Ralston’s (James Franco) remarkable adventure to save himself after a fallen boulder crashes on his arm and traps him in an isolated canyon in Utah. Over the next five days Ralston examines his life and survives the elements to finally discover he has the courage and the wherewithal to extricate himself by any means necessary, scale a 65 foot wall and hike over eight miles before he is finally rescued. Throughout his journey, Ralston recalls friends, lovers (Clemence Poesy), family, and the two hikers (Amber Tamblyn and Kate Mara) he met before his accident. Will they be the last two people he ever had the chance to meet? A visceral thrilling story that will take an audience on a never before experienced journey and prove what we can do when we choose life. 127 Hours will screen at both the Toronto International Film Festival and the London Film Festival before opening on November 5th, 2010. What do you think of the trailer for 127 Hours? [youtube]http://www.youtube.com/watch?v=w-3AHv2E5jg[/youtube]
Continue Reading
Advertisement
You may also like...
Related Topics:127 Hours, Amber Tamblyn, Danny Boyle, james franco, Kate Mara, Toronto International Film Festival