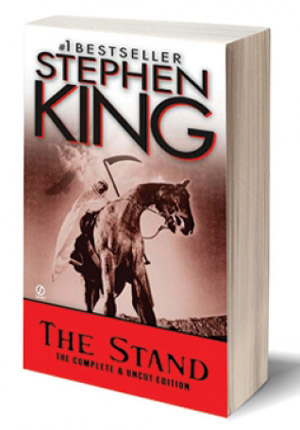 If I was David Yates, I would pack my bags and go somewhere far, far away! Because then I would know that I’m the man responsible for one of the most successful film franchises in history (Harry Potter) so, logically, I deserve a vacation. Yeah, I know you’d do anything to get rid of me, but I’m not going anywhere because, unfortunately, I’m not David Yates. And, Mr. Yates is unstoppable. And he will team up with screenwriter Steve Kloves (who, in case you have no idea, wrote every Harry Potter film except Order of the Phoenix) to adapt Stephen King’s novel The Stand. Ok, nothing new in here, but this definitely looks huge. And what’s most important, Warner Bros is in the process of finalizing the deals for Yates and Kloves to re-team for a multi-movie version of Stephen King’s epic that goes like this: “This is the way the world ends: with a nanosecond of computer error in a Defense Department laboratory and a million casual contacts that form the links in a chain letter of death. And here is the bleak new world of the day after: a world stripped of its institutions and emptied of 99 percent of its people. A world in which a handful of panicky survivors choose sides – or are chosen. A world in which good rides on the frail shoulders of the 108-year-old Mother Abigail – and the worst nightmares of evil are embodied in a man with a lethal smile and unspeakable powers: Randall Flagg, the dark man.” Yeah, the dark man part sounds great, so I’m definitely looking forward to hear some casting speculations as soon as possible. After all, we’re talking about a post-apocalyptic horror/fantasy novel with sooo many great characters. Any thoughts on this or you’re just planning to stand here?
Continue Reading
Advertisement
You may also like...
Related Topics:David Yates, Stephen King, steve kloves, The Stand

Mark Wahlberg in Talks to Star in Two Guns for Universal
Freeman to Join Ruffalo, Seyfried and Eisenberg in NOW YOU SEE ME
Advertisement