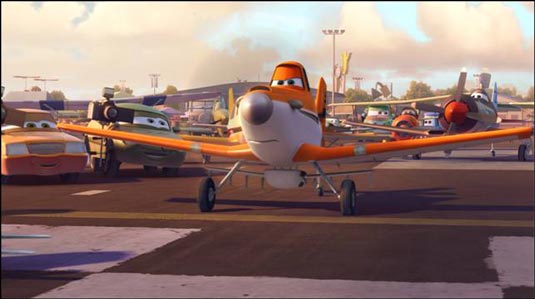 Here we have the first official poster and quite a bunch of character posters from the upcoming Disney’s family animated movie, Planes, a Cars spin-off. Take a look at the feisty Dusty, world champion racer Ripslinger and the charming El Chupacabra fly in formation as Disney debuts their brand new poster:

Audiences worldwide are fastening their seatbelts as Disney’s Planes prepares to take off this summer.

Cedric the Entertainer (Madagascar) as Leadbottom, a puttering old biplane who has no time for Dusty’s far-fetched flights of fancy.

Julia Louis-Dreyfus (Seinfeld) lends her voice to Rochelle, a tough and confident racer who is the pride of the Great White North.

John Cleese (Monthy Python’s Flying Circus) is the voice of Bulldog, the oldest and arguably wisest racer on the circuit.

Sinbad (Comedy Central’s Where U Been?) brings to life Roper, an irascible race official pitty full of sly remarks and colorful commentary.

Recently added Dane Cook, as the voice of main character, the ‘feisty Dusty’. Finally, Oliver Kalkofe (Neues vom Wixxer) provides the voice of meek German minicar Franz and his brazen airborne alter ego Fliegenhosen (no poster so far, for some reason). Also, take a look at the trailer, in case you’ve missed it: Inspired by the world of Cars and directed by Disneytoon Studios veteran and aviation enthusiast Klay Hall, Disney’s Planes is an action-packed 3D animated comedy adventure about Dusty’s dream of competing as a high-flying air racer – and his decidedly unfortunate fear of heights. The film takes off in theaters in 3D on August 9th, 2013.