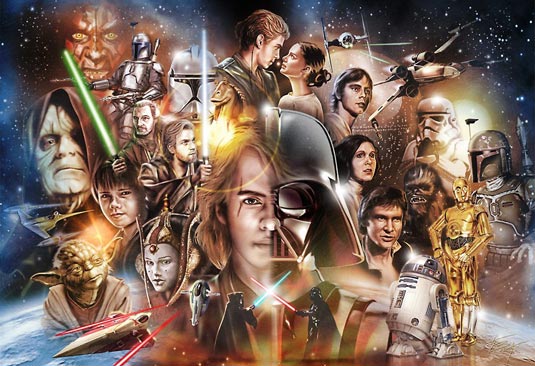 Finally, we get some news about what interests ME – after today’s almost-confirmed news of Matthew Vaughn directing Star Wars: Episode VII, it appears that Disney has plans far bigger than a third Star Wars trilogy, now that we all know that the studio has acquired Lucasfilm. It was confirmed last week that Lawrence Kasdan (co-writer of The Empire Strikes Back and Return of the Jedi) and Simon Kinberg (co-writer of Sherlock Holmes) are writing new Star Wars installments in addition to Episode VII – which is being scripted by Michael Arndt (Toy Story 3). Now we’re hearing that those projects might not be Episodes VIII and IX after all; instead, Kasdan and Kinberg could be writing separate films that also take place “a long time ago, in a galaxy far, far away”. According to THR, Kasdan and Kinberg are “not necessarily” working on Episodes VIII & IX; but rather, their screenplays could end up serving as either official Episodes, or spinoffs that revolve around side characters outside of the Skywalker clan and their close acquaintances (Chewbacca, Lando Calrissian, etc.). Disney CEO Robert Iger has said earlier that the intention is to release a new Star Wars movie “every two to three years” – beginning with Episode VII in 2015 – but it now appears that some of these films could indeed focus on “other pieces of the expansive mythos.” However, it should be mentioned that soon-to-be Lucasfilm President, Kathleen Kennedy, has also announced that the company wants to produce a few (Lucasfilm) movies on a yearly basis. When you add one and one, it does seem probable that there could be Star Wars spinoffs released during the ‘waiting period’ between Episodes. Just don’t make them Christmass-y again. In addition, it all indicates now that Disney and Lucasfilm are relying on a set of “blueprints” for constructing the expanded Star Wars movie universe that resembles what was used to build Marvel’s Cinematic Universe, with the Episodes storyline serving in the same unifying capacity as the Avengers installments in the MCU. Star Wars Expanded Universe literature and The Clone Wars animated TV series have already shown us that there are countless worlds to explore and stories to tell – outside those concerning the battle to restore freedom to the galaxy – and the vastness of the setting makes it easier for writers to avoid getting stuck in the task of tying all the events of the Star Wars galaxy together (whether working on a new novel, comic book, TV show, and now film). And here’s a hi-res chart of galaxy so far, collected from the so-far-published material, just to see how actually BIG that Universe is (thanks to iNFOTHREAD):

That’s to say, the task of building a shared Star Wars movie-verse should prove to be much simpler (and cleaner) than putting together a coherent Marvel movie-verse proved to be in Phase One of the MCU, especially given the SW Universe timeline, presented on Wookiepedia. After all, the events that transpire in a standalone feature about a single side character (such as the Boba Fett movie proposed by Joe Johnston) need not have much – if any – effect on the central ‘Episodes’ thread, so there’s wiggle room for various screenwriters to come in and experiment by telling different sorts of Star Wars stories. Now I only need to live long enough to see the stories set in the Old Republic period (from the Knights of the Old Republic games) ‘coming to life’, and I can die a happy woman.
Continue Reading
Advertisement
You may also like...
Related Topics:Episode VII, Joe Johnston, Lawrence Kasdan, Matthew Vaughn, Michael Arndt, Simon Kinberg, Star Wars