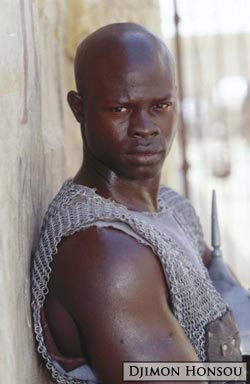 Djimon Hounsou‘s (Blood Diamond) “dream project” has finally been confirmed in the trades. Variety reports that Hounsou is pairing up with Dynamite Entertainment to star in and produce a movie about Thulsa Doom, nemesis of King Kull and Conan the Barbarian.The film will showcase the origins of the character, setting him up as a flawed hero. And we will see that his road to hell was paved with good intentions. A comic book headlined by Thulsa Doom will hit stands later next year. The character of Thulsa Doom first appeared in the 1930s in Robert E. Howard‘s pulp stories. A powerful necromancer, Thulsa Doom is Kull the Conqueror’s primary foe. In the comics, he is portrayed as an undead sorcerer with a skull for a face. Not only can he control snakes and serpents, but he had the ability to change shape, become invisible, and was seeming immortal until Conan killed him in the movie. In that classic 1982 Arnold Schwarzenegger flick, Doom was actually played by James Earl Jones. He was portrayed as the primarily villain that Conan eventually fought. The film is not yet set up with a studio, and does not have a set start date at this time.
Continue Reading
Advertisement
You may also like...
Related Topics: