Emma Stone and Woody Harrelson will reunite once again, and this time for the upcoming romantic comedy Friends With Benefits. 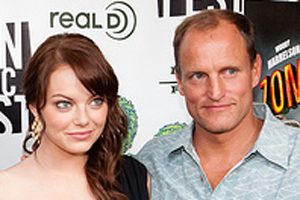 You probably remember that quite interesting names are involved in the whole thing: Justin Timberlake and Mila Kunis, with Patricia Clarkson, Jenna Elfman, Andy Samberg and Richard Jenkins who are also coming on board.

Will Gluck (from Easy A) is in charge for directing the movie that will follow: “a headhunter who recruits a magazine editor and since each is too busy to find a mate, they agree to sleep together with no strings attached. Things get complicated when the guy falls for the girl, who’s dating someone else.”

Stone and Harrelson recently starred together in the Zombieland. It is unknown at this time what roles the two actors will fill in the cast.

New York Yankee third baseman Alex Rodriguez is also in negotiations to make his film debut in the movie, though it is not known if he will appear as himself or another character.