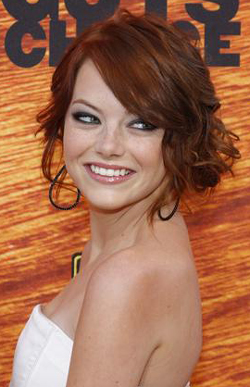 It’s official now! Emma Stone has been cast as the female lead in the upcoming Spider-Man. And yes, we already had a little chat about Marc Webb’s new flick, but we had a little rumor back then that Stone would be playing Mary Jane Watson. So, finally some official announcement about the movie we’re all waiting for. Check out the rest of this report for more official details… Matt Tolmach, president of Columbia Pictures said: “It’s been an incredible journey for us to watch Emma’s star rise as an actress. She is extraordinarily talented and has a very special on-screen spark that is perfect for this role. Given her history with the studio, casting her in one of our most important franchises is a real thrill.” That actually means Stone has been tapped for the role of Gwen Stacy opposite Andrew Garfield as Peter Parker. On the other hand, director Webb added that: “The chemistry between Andrew and Emma was stunning and made Emma the clear choice. At the heart of the story of Peter Parker is not only the amazing Spider-Man, but also an ordinary teenager who is wondering what he has to do to get the girl. Andrew and Emma will bring everything audiences expect to these roles, but also make them their own. Much to my surprise, it was fun to find out that our choice for Gwen (Emma) is also a natural blonde.” Let us just remind you that the movie, to be directed by Marc Webb from a screenplay by James Vanderbilt and produced by Avi Arad and Laura Ziskin, will begin production in December and will be released in theaters nationwide in 3D on July 3, 2012.
Continue Reading
Advertisement
You may also like...
Related Topics:Andrew Garfield, Emma Stone, Marc Webb, Spider-Man