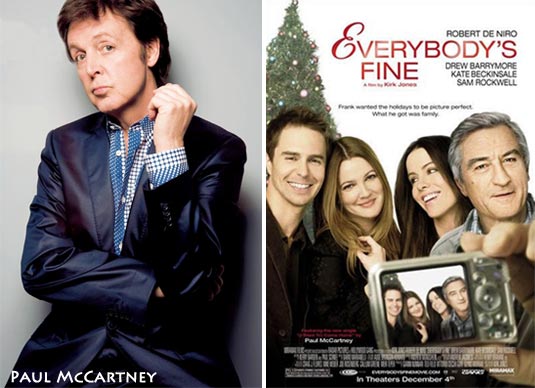 Paul McCartney has written an original song, “(I Want To) Come Home,” for the upcoming Miramax’s new holiday dramedy “Everybody’s Fine,” starring Robert De Niro, Drew Barrymore, Kate Beckinsale and Sam Rockwell. After attending an early screening of the film, McCartney felt a deep connection to the material and began writing the song that very night. “Everybody’s Fine,” written and directed by Kirk Jones (Waking Ned Devine), is the story of a widower (De Niro) who embarks on an impromptu road trip to reconnect with each of his grown children only to discover that their lives are far from picture perfect. Collaborating with composer Dario Marianelli on the orchestrations, McCartney has crafted an intimate song that compliments the themes of the film and serves as a final grace note to the moving story. Reflecting on his reaction to the film, McCartney said,

“I could definitely identify with Robert De Niro’s character because I have grown-up kids who have their own families.”