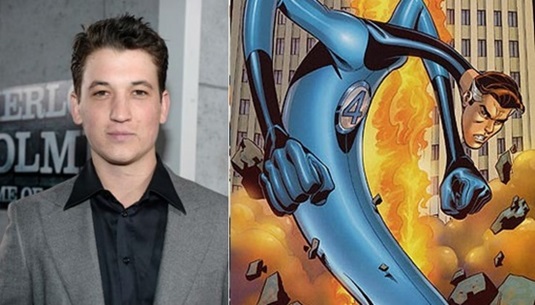 Miles Teller is one of the actors in-contention for the leading role of Reed Richards/Mr. Fantastic in the upcoming reboot of Fantastic Four from Chronicle‘s director Josh Trank. The Spectacular Now star is reportedly the director’s top choice with shooting set to start this September in Louisiana. Trank is directing from script by Seth Grahame-Smith, Michael Green and Jeremy Slater. Furthremore, Alison Williams (Girls) is being eyed for Sue Storm a.k.a. The Invisible Woman, and Michael B. Jordan (Fruitvale Station) is a possibility for Sue’s brother, Johnny Storm a.k.a. The Human Torch. Fantastic Four is scheduled for a March 6th, 2015 release, though other details are still under wraps. In the comics the story starts when ‘Reed Richards, Sue Storm, Johnny Storm and Ben Grimm board a shuttle to work on a scientific mission in space. Their ship winds up getting hit by cosmic rays that gives each of them very special powers: Reed, as Mr. Fantastic, can bend his body into any shape; Sue, as The Invisible Woman, can both disappear and project force fields; Johnny, as the Human Torch, can control fire and fly; and Ben, as The Thing, has his entire body covered in hard stone and is given amazing strength. Using their powers for good they fight off the forces of evil.’ What do you think of the gray-haired elder statesman played by the up-and-coming star turned 26 this year?

Chris Evans To Direct & Star In 1:30 TRAIN
Which Documentary Should You Watch? Let Documentary Film Flowchart Help You Decide!
Advertisement