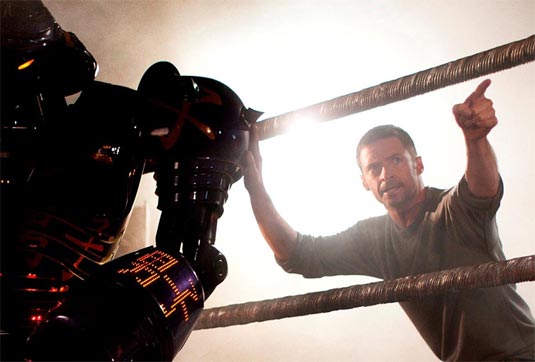 Hugh Jackman’s futuristic film directed by Shawn Levy (Date Night, Night at the Museum) Real Steel has had its first image released via USA Today. The film co-stars Anthony Mackie, Evangeline Lilly, Dakota Goyo as Jackman’s young son, Hope Davis, James Rebhorn, Kevin Durand and Olga Fonda. Real Steel is set in the near future (the year 2020), and has Jackman playing a former boxer who, along with his estranged son Max (Goyo), tries to make it in the lucrative world of robot boxing.

Real Steel, Hugh Jackman and director Shawn Levy Here’s the official synopsis: A gritty, white-knuckle, action ride set in the near-future, where the sport of boxing has gone hi-tech, “Real Steel” stars Hugh Jackman as Charlie Kenton, a washed-up fighter who lost his chance at a title when 2000-pound, 8-foot-tall steel robots took over the ring. Now nothing but a small-time promoter, Charlie earns just enough money piecing together low-end bots from scrap metal to get from one underground boxing venue to the next. When Charlie hits rock bottom, he reluctantly teams up with his estranged son Max (Dakota Goyo) to build and train a championship contender. As the stakes in the brutal, no-holds-barred arena are raised, Charlie and Max, against all odds, get one last shot at a comeback. The film was written by Leslie Bohem and John Gatins and is based on a short story by Richard Matheson. Filming on Real Steel is currently taking place in Michigan, with the film set for release on 18 November, 2011.