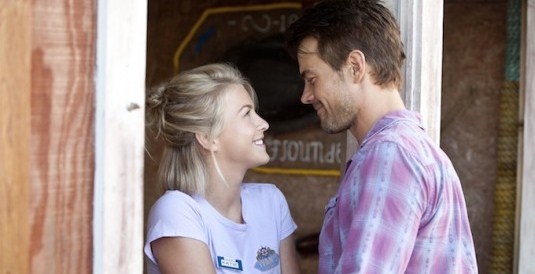 Fall in love, struggle with some dark secrets… what’s safe about that? Have no idea, but I guess that we’ll soon have our chance to find that out because Safe Haven is coming! The movie, which stars Josh Duhamel and Julianne Hough in the leading roles, comes from director Lasse Hallström and looks pretty cool at this moment to me. Maybe because Duhamel and Hough are smiling and hugging and doing all that romantic shit in these photos? Don’t know, take a look! So, Safe Haven is based on the Nicholas Sparks novel of the same name and will tell us the story about a young woman’s struggle to find love again after she arrives in a small North Carolina town. Her reluctance to join the tight-knit community raises questions about her past. Slowly, she begins putting down roots, and gains the courage to start a relationship with Alex, a widowed store owner with two young children. But dark secrets intrude on her new life with such terror that she is forced to rediscover the meaning of sacrifice and rely on the power of love in this deeply moving romantic thriller. Anyway, Safe Haven also stars Cobie Smulders and David Lyons and Relativity Media will release the movie on February 14th, 2013. So, how does it look to you?

First Look at Amber Heard Seducing Danny Trejo in MACHETE KILLS
How To Clean Your ROBOCOP Suit? New Photos Will Teach You!
Advertisement