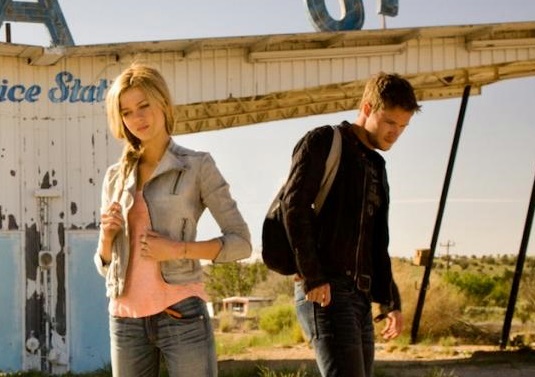 Outrageously good things we know so far about the fourth installment in Michael Bay’s lucrative Transformers franchise are the official title, the first shot from the set (that features director, stars, cinematographer, camera operators standing on top of what looked like a giant alien pyramid), we’ve seen plenty of fancy cars, teaser poster for the movie, Bay’s epic self-portrait (below) and now we have one image of some of Transformers: Age of Extinction‘s human cast! Bay tweeted the photo which includes a new look at Mark Wahlberg, our first look at the film’s leading lady Nicola Peltz, a daughter to Wahlberg’s character, and Jack Reynor, her race car driving boyfriend, on the set of the highly anticipated movie that also stars Stanley Tucci, Kelsey Grammer, Sophia Myles, Li Bingbing, T.J. Miller, Han Geng and Titus Welliver in the June 27th, 2014 release. Transformers: Age of Extinction will see the ‘live-action’ debut of the Dinobots and Bay himself that it will involve a ‘Chase from Hell’, though still no plot details of the sequel are revealed. This movie has been filming in Detroit for a couple of months. Take a better look at the first image of the new lovebirds together.