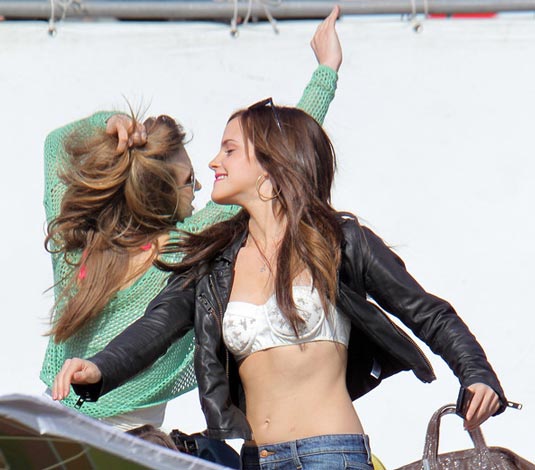 While the Cannes Film Festival may be the place where the finest authors from around the world come to unveil their latest babies, the other side of the coin is the robust market where distributors and producers hawk their wares to buyers, hoping to sell foreign rights for their pictures. In order to help get contracts drawn up and cheques signed, clips, featurettes or entire movies may be shown, but if those aren’t ready, sometimes a still from the movie will have to suffice. And somewhere in that vast market the first official photo of the cast of Sofia Coppola‘s The Bling Ring has seen the light of day (and/or spotlights). We’ve already seen numerous set photos but this is the first with the gang of teenage thieves all paired up together. Emma Watson leads the cast in the tale based on a true story, of a group of affluent teenagers who pulled off some daring heists of celebrity homes, including those of Lindsay Lohan, Rachel Bilson, Megan Fox and Orlando Bloom, taking up to $3 million worth of goods.