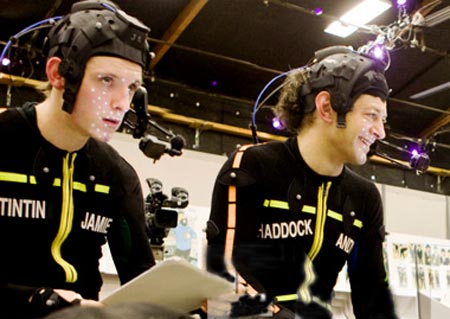 Empire has published the first image from the set of “The Adventures of Tintin: Secret of the Unicorn,” complete with a first shot of actors Andy Serkis and Jamie Bell in their motion capture suits.

Based on the character created in 1929 by Herge a.k.a. Georges Remi, “The Adventures of Tintin: Secret of the Unicorn” is the first in the series of 3-D motion capture films. The movie will chronicle the adventures faced by junior reporter Tintin and his friends in following stories to the ends of the earth, even though he often finds his own life in jeopardy.

The film stars Jamie Bell as Tintin, the intrepid young reporter whose relentless pursuit of a good story thrusts him into a world of high adventure, and Daniel Craig as the nefarious Red Rackham. Bell and Craig are joined by an international cast that includes Serkis, Simon Pegg, Nick Frost, Gad Elmaleh, Toby Jones and Mackenzie Crook.