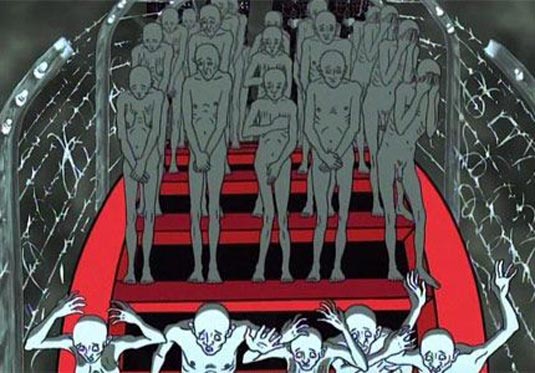 For the past 25 years, Hungarian animator Marcell Jankovics has been working on this 160 min. animation with incredibly psychedelic visuals, which sometimes even seem Escher-like. Based on a play by Imre Madach with the same name, the story of The Tragedy of Man follows Adam and Eve, guided by Lucifer, from the Farden of Eden to the future, as they search for the meaning of life. Synopsis: “The protagonist of Madach’s play is the first human couple, who are, after having been chased out of the Garden of Eden, accompanied through history by Satan. Lucifer puts Adam to sleep, and the two begin to travel through history. In each period, Adam’s previous dreams are exposed as being futile, flawed, or unattainable. Adam ages with each passing scene, representing not only his increasing wisdom but also the increasing burden of hopelessness. In the end, Adam wakes up and realizes that the ultimate goal is death, but life consists of struggle and this struggle must be the goal.” I’m guessing that depictions of Anubis and other pre-christian deities might serve as a kind of historical introduction, but I guess that the entire animated movie will explain it, once it is released. Here’s the trailer, take a look: [youtube]http://youtu.be/0eSdOPcHum8[/youtube]
Continue Reading
Advertisement
You may also like...
Related Topics: