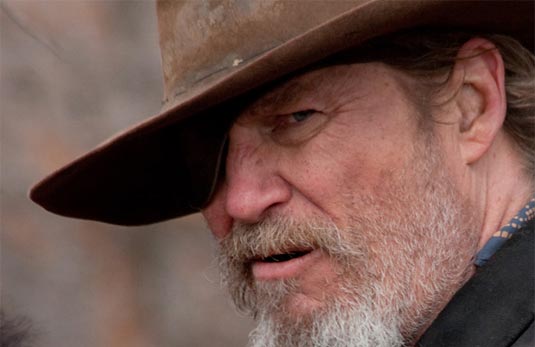 True Grit, the new Coen Brothers (Ethan and Joel) movie, is heading into cinemas Stateside this December, and the first hi-res photo from the movie has just pitched up online. The photo shows Jeff Bridges (Crazy Heart), in the same role that won John Wayne an Oscar for the 1969 original, as one-eyed sheriff Rooster and Hailee Steinfeld as Mattie Ross. Story centers on a 14-year-old girl (Steinfeld) who tags along with an aging US marshal, Rooster Cogburn (Bridges), and another lawman to track the outlaw who killed her father. The original told the story from Cogburn’s point of view, but the new version will work from the viewpoint of the girl.

“I think [the book is] much funnier than the movie was so I think, unfortunately, they lost a lot of humour,”

“It also ends differently than the movie did… [The book’s] a lot tougher and more violent than the movie reflects. Which is part of what’s interesting about it.”