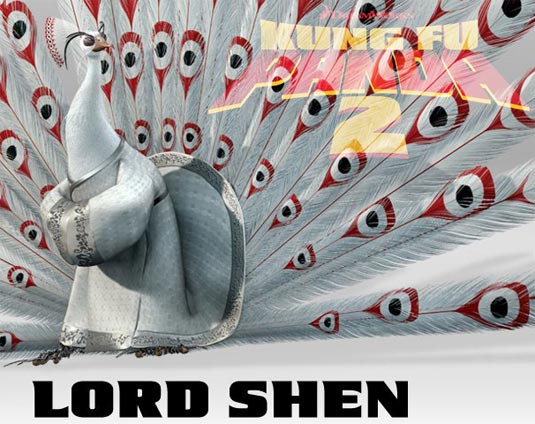 DreamWorks Animation has released a few new posters via Kung Fu Panda official Facebook page for their upcoming Kung Fu Panda 2 which reveal four character profiles and images for the new movie. Those exposed in the one-sheets are Soothsayer, Lord Shen, Wolf Boss and Gorillas. Kung Fu Panda 2′ sees Po living his dream as The Dragon Warrior, protecting the Valley of Peace alongside his friends and fellow kung fu masters, The Furious Five. But Po’s new life of awesomeness is threatened by the emergence of a formidable villain, who plans to use a secret, unstoppable weapon to conquer China and destroy kung fu. He must look to his past and uncover the secrets of his mysterious origins; only then will Po be able to unlock the strength he needs to succeed. Click any of the images below for larger versions.

Lord Shen (Gary Oldman): Lord Shen is hyper intelligent, supremely lethal, and burns with ambition. It’s a combustible combination. He’s intent on wiping out kung fu and taking over China. That puts him on a collision course with Po and The Five.

Gorillas: The Gorillas are the muscle in Lord Shen’s army. If his evil schemes require any heavy lifting, they’ll be the ones doing it. Shen’s personal guard is made up entirely of these powerful (and powerfully large) brutes, who are honor bound to their master.

Soothsayer (Michelle Yeoh): The aged Soothsayer has been advisor to the Peacocks, rulers of Gongmen City, her entire life. She is wise and gifted with knowledge of the future.