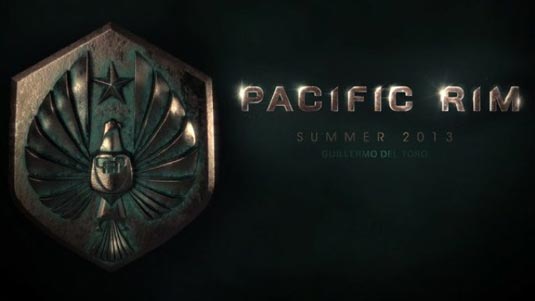 After not having much luck with directing The Hobbit (left when he thought the film would be held up forever by lawsuits) and At the Mountains of Madness with Tom Cruise (Universal passed on it in favor of Battleship, can you believe it?!), Guillermo del Toro has finally again wrapped something big, and his first directorial effort since Hellboy 2: The Golden Army. The first official synopsis for his monsters versus robots movie Pacific Rim is out. Summarized, the whole thing is about giant robots piloted by different teams of humans struggling to fight strange monsters funneling out of the sea. This movie is going to be massive (Yes! Live-action anime Mecha!): “When legions of monstrous creatures, known as Kaiju, started rising from the sea, a war began that would take millions of lives and consume humanity’s resources for years on end. To combat the giant Kaiju, a special type of weapon was devised: massive robots, called Jaegers, which are controlled simultaneously by two pilots whose minds are locked in a neural bridge. But even the Jaegers are proving nearly defenseless in the face of the relentless Kaiju. On the verge of defeat, the forces defending mankind have no choice but to turn to two unlikely heroes – a washed up former pilot (Charlie Hunnam) and an untested trainee (Rinko Kikuchi) – who are teamed to drive a legendary but seemingly obsolete Jaeger from the past. Together, they stand as mankind’s last hope against the mounting apocalypse.”” Oscar nominee Guillermo del Toro (Pan’s Labyrinth) is directing Pacific Rim based on a script by Travis Beacham (Clash of the Titans… hopefully it won’t disappoint as that one). Thomas Tull, Jon Jashni and Mary Parent are producing, with Callum Greene as executive producer.