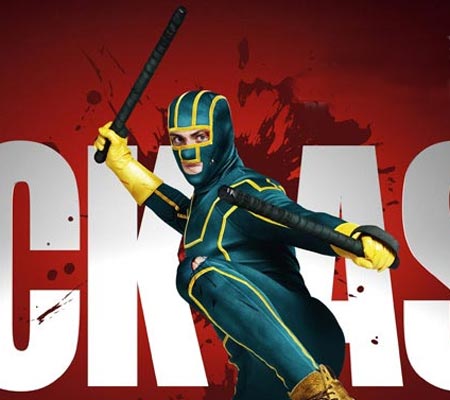 Lionsgate has released a new Kick-Ass movie poster. The poster feature Aaron Johnson as Kick-Ass. Kick-Ass is based on the groundbreaking, best-selling comic by Mark Millar and John Romita Jr. A twisted, funny, high-octane adventure tells the story of average teenager Dave Lizewski (Aaron Johnson), a comic-book fanboy who decides to take his obsession as inspiration to become a real-life superhero. As any good superhero would, he chooses a new name — Kick-Ass — assembles a suit and mask to wear, and gets to work fighting crime. There’s only one problem standing in his way: Kick-Ass has absolutely no superpowers. His life is forever changed as he inspires a subculture of copy cats, meets up with a pair of crazed vigilantes — including an 11-year-old sword-wielding dynamo, Hit Girl (Chloë Moretz) and her father, Big Daddy (Nicolas Cage) — and forges a friendship with another fledgling superhero, Red Mist (Christopher Mintz-Plasse). But thanks to the scheming of a local mob boss Frank D’Amico (Mark Strong), that new alliance will be put to the test. Matthew Vaughn (Stardust, Layer Cake) directed the movie from the script that he wrote with Jane Goldman. “Kick-Ass” will be released in theaters everywhere on April 16, 2010. What do you think about the new poster? Looking forward to Kick-Ass movie?

She’s Out of My League Posters
First Ironclad Poster
Advertisement