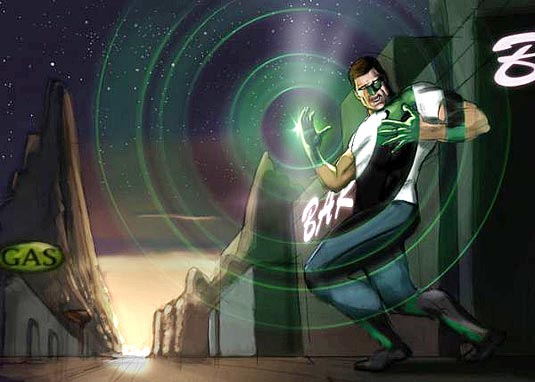 The Green Lantern concept art is just too good to pass up. Illustrator Brian Murray posted a number of images that he created for Green Lantern screenwriter and (potential) director Greg Berlanti on his official website. The images were part of the presentation package Murray created for Berlanti, some of which were used to get Berlanti the directing gig to begin with. Though casting rumors for the JLA version of the Green Lantern indicated that the character would be reimagined as African-American, these illustrations show a square-jawed white man– pretty much your typical image of a superhero.

The Green Lantern movie follows the making of the Earthly bound Lantern, and follows his journey as he comes to terms with his powers and weaknesses. The script penned by Marc Guggenheim, Greg Berlanti and Michael Green supposedly includes many other superhero cameos along with a climax that sets up the Lantern for a sequel, should the public approve of more from this DC Comics hero. [Source: Brian Murray]