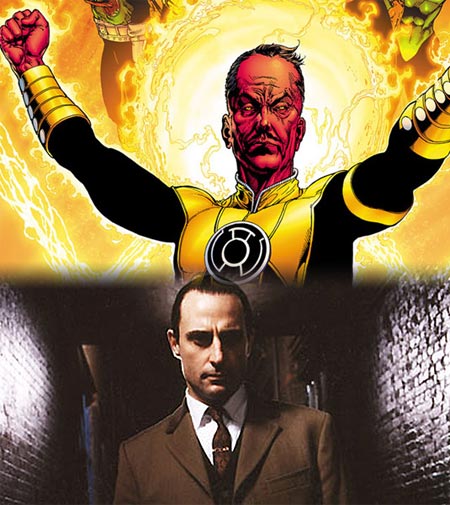 “No, that’s completely wrong. Somebody told me about it this morning; I had never heard it before in my life. In fact, we’re in ngotiations with Mark Strong to play Sinestro. He’s not only a wonderful actor, but he looks like Sinestro.”

“He’s not only a wonderful actor, but he looks like Sinestro. If you look up old pictures of Sinestro, he’s very like him,” he told them. “The Jackie Earle Haley thing, somebody told me about it this morning; I had never heard it before in my life.”

On the appearances of characters from the comics Campbell said:

“Well, Kilowog will be,” said Campebll. “Tomar-Re is in it. Sinestro is in it. Abin Sur is in it. All the origin people. Carol [Ferris], of course, who will be played by Blake Lively. All the main characters are there, and it’s a complex story. The origin story of Green Lantern is complex, probably one of the most complex, which makes it a challenge to get it right.”

Just the past couple of years, Mark Strong was in Stardust, Body Of Lies, Rocknrolla, The Young Victoria, Sherlock Holmes, this year he’s going to be seen in Robin Hood, Kick-Ass, Eagle of the Ninth, The Way Back and he’s going to be in The Guard and John Carter of Mars. “Green Lantern” is currently scheduled for release on June 17, 2011.
Continue Reading
Advertisement
You may also like...
Related Topics:Green Lantern, Jackie Earle Haley, Mark Strong, Martin Campbell