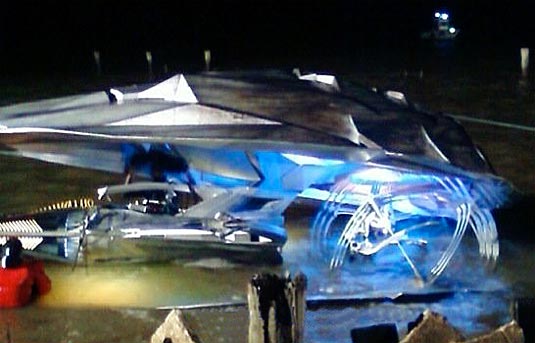 Comicbookmovie has gotten their hands on a photo that appears to be from the Madisonville, Louisiana set of Martin Campbell’s Green Lantern and appears to be the spaceship of Abin Sur, the Green Lantern who gives Hal Jordan (played by Ryan Reynolds) his power ring. It looks like it has made a water landing instead of crashing on land as it does in the comics.

Jordan was chosen as the successor to Green Lantern Corps member Abin Sur when Sur’s ship crash-landed on Earth. Before he died, Sur bestowed his power ring to Jordan, making the young pilot a part of the intergalactic peacekeeping organization, the Green Lantern Corps.

Joining Ryan Reynolds in the cast ensemble are Mark Strong as Sinestro, Blake Lively as Carol Ferris, Peter Sarsgaard as the villain Dr. Hector Hammond and Angela Bassett as Dr. Amanda Waller, a government agent who is a staple of the DC Comics series.

Green Lantern is slated to hit theaters on June 17, 2011 from Warner Bros. Pictures.