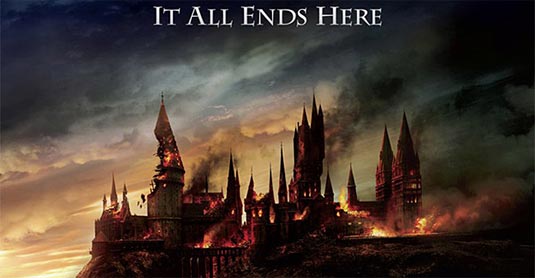 The first teaser poster for Harry Potter and the Deathly Hallows was released. The poster advertises both parts of the final chapter in the story which has been split into two films. Harry Potter and the Deathly Hallows: Part I comes to 3D, 2D and IMAX 3D theaters November 19th, 2010 and Part II on July 15th 2011. Part 1 begins as Harry, Ron and Hermione set out on their perilous mission to track down and destroy the secret to Voldemort’s immortality and destruction of the Horcruxes. On their own, without the guidance of their professors or the protection of Professor Dumbledore, the three friends must now rely on one another more than ever. But there are Dark Forces in their midst that threaten to tear them apart. The two films, directed by David Yates, stars Daniel Radcliffe, Emma Watson, Rupert Grint, Alan Rickman, Ralph Fiennes, Michael Gambon, Maggie Smith and Helena Bonham Carter.