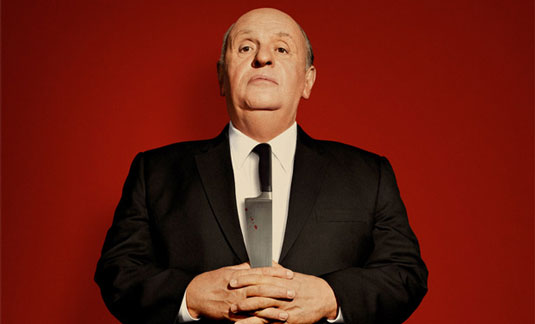 Japan is, according to many, a very weird country. The tastes, the way of living (actually not the hi-tech life we imagined), not to mention sense of humor and especially their way of advertising. Naturally, we wanted to see how they would advertise some of Hollywood films, so we give you this Japanese trailer for Hitchcock that includes an introductory comedic skit, featuring the first Japanese Hitchcock inpersonator we’ve ever seen and another dude. What we did not know is that these two are a well-known comedic duo in Japan called Bakusho Mondai – Hikari Ota (the director) and Tanaka Yuji (Hitchcock). Have a look: I bet you want to know what they are saying, eh? We thought of that so you can read the translation of the dialogue in Japanese below, thanks to movies.com:

“Hi, I am Hitchcock. Up until now, I’ve released all sorts of suspense movies. My most well-known movie worldwide is Birds.” “Woo, man, this is delicious! This bird!” “Once again. Take two. (Ni mae)”  “Whoa, Vertigo (me mae), oh, wait, I’m drunk.” (play on words) “Once again. Rear Window.” “Any of them are great movies, but without a doubt my number one most famous movie…” “Saikou! (Psycho)” “It’s Psycho!… Let me just say that from the very beginning you’ve gotten every single one of these wrong!” “Up until now I’ve shown you a few examples of my work. That I have been able to leave so many films behind is for this reason – An exceedingly talented woman, the scriptwriter and my wife. Cliched ideas are unimaginable, we always looked for new ideas. The woman’s idea (his wife) was always original. For example, this… (giant pan falls on his head)” (offscreen) Cut!! “Ok!! Now that was original!” “That’s so clichéd!! What’s so original about that?! Why are you dressed like this?! ” “I’m the director.” “I know that!” “That’s good?” Vertical wipe. “It’s Hitchcock. Me and my wife. Even though I was called a genius but never managed to win an Oscar, there was one other genius who supported me. This movie is the story of me and my wife.” Trailer: Voice-over: “The suspense God and his wife.” Insert cards: “The man who was called a God.” “The woman who supported the God.” Voice-over: “The man who was never able to win an Oscar. The woman who was in the shadows of hardships. The other Hitchcock.”

On my “Japanese weirdness scale” this would be, say, three or four (out of ten) – I must admit I’ve seen WAY weirder things. What do you think? Hitchcock is directed by Sacha Gervasi and it stars Anthony Hopkins, Helen Mirren, Scarlett Johansson, Toni Collette, Jessica Biel and others. It has been released nationwide on December 14th, 2012 (it will be released on April 5th in Japan).